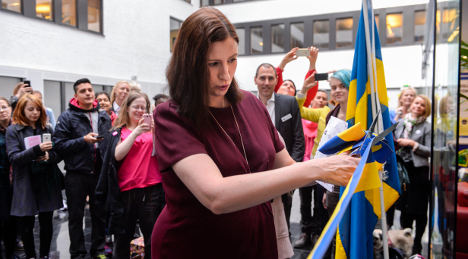 Birgitta Ohlsson officially opens EU voting in Sweden. Photo: Per Larsson/TT
"This is one of the most value-based elections we will have during our lifetime," said EU Minister Birgitta Ohlsson as she attended a European Commission event to advertise the start of advance voting in Sweden. She was there, she told The Local, to "energize voters".
Beginning Wednesday, voters in Sweden – including people from other EU countries living in Sweden – can cast their ballot in the European parliamentary elections. In Stockholm, for example, Swedes and other EU citizens can take their vote card and their ID and head to any library to vote from now until May 25th. At stake are the 20 seats that Sweden holds in a sea of 751 parliamentarians.
Last time around, in 2009, less than half of voters in Sweden showed up to vote. It was nonetheless an increase compared to 2004, when around 37 percent of eligible voters headed to the polls.
Olsson said "decent people" had to head to the polls this time around to uphold human rights, dignity, and democracy.
"We see a very militarily aggressive Russia, we see xenophobic parties on the rise, we see the core values of the European Union threatened in some countries," the Liberal Party (Folkpartiet) politician cautioned.
The nationalist parties were a particular sore point for the Swedish minister.
"I have a great fear when it comes to the rise of the xenophobic parties in far too many countries," she said, pointing to neo-Nazis in Greece, right-wing extremists in Hungary, and racist and xenophobic parties "even in Sweden".
She noted that many of them were gaining ground, some even leading in the opinion polls in France, the UK, Denmark and the Netherlands. Ohlsson said the best method to defeat them was to show up and vote.
"It's important now to be an active citizen," she concluded.
Indeed, there was a slew of eager voters at Stockholm's Europahuset on Wednesday, many of them clad in pink. They offered a round of applause when Ohlsson cut the official ribbon and let voters in behind her.
Ohlsson's party holds three of Sweden's 20 seats in the European parliament. Party leader Jan Björklund told The Local earlier this week that they had no concrete goal to increase the number of seats.
"Liberal values are the foundation of the European Union. We don't have a goal (to increase parliamentary seats) per se, but we're doing all we can to get as many liberals in as possible because there is more euroscepticism nowadays than there was before," he said.
"We are Sweden's most EU-friendly party, although that's not difficult in Sweden where most people say 'no' or 'maybe' to the EU," he said.
"The bureaucratization can annoy us too, but we still have to see the benefits of the European cooperation. The EU economy is now the world's biggest, and the EU is the world's most successful peace project, and no other part of the world has such ambitious environmental goals."
But it wasn't the cornflower blue of the Swedish Liberals that coloured Wednesday's event in Stockholm, rather a streak of voters in pink. Sweden's upstart Feminist initiative (Fi) party had encouraged its supporters to show up and vote, explained voter My Lundström.
"I'm here to put the feminists into the EU parliament," she told The Local, adding that many of the early-voters were supporting the Fi. "It's time for the feminist revolution."
Additional reporting by Ann Törnkvist