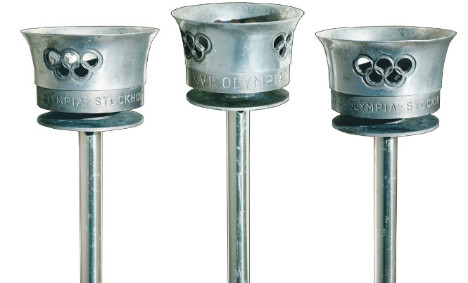 One of the Olympic Equestrian torches of 1956 which netted a substantial sum. Photo: Ingrid O'Neil

The prized torch was used in the Equestrian Olympic torch relay from Olympia in Greece to the Swedish capital.

Featuring distinctive burn marks inside and outside the bowl it's believed to be just one of five torches used in the torch relay in Sweden, making it higly coveted by collectors.

"The auction went very well – as you can imagine I was quite surprised about the level of interest and the amount it sold for," O'Neil told the website insidethegames.

She added; "It also made for an extremely happy consignor."

The 1956 track and field events for the Olympics were held in Melbourne, Australia, but due to quarantine regulations down under the equestrian events were hosted in Sweden.

As a result, items of memorabilia from the event are among the most sought after by collectors with deep pockets.

The torch had quite a journey, making its way from Greece to Copenhagen then via Malmö to Stockholm, where 150 riders carried the flame for five days and nights through the capital.

Olympic experts believe that the auctioned torch was used on the opening day of the Equestrian games. It was described in the auction catalogue as "one of the rarest of all Olympic torch relays."

The most money shelled out for an Olympic torch was a $867,266 for a winner's cup used at the inaugural Olympics in Athens in 1896.

Sweden hosted the summer Olympics for the one and only time in 1912. After posting an initial bid to host the 2022 Winter Games, the city ditched the idea on grounds of cost.