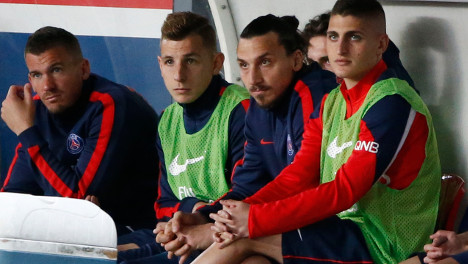 Injured Ibrahimovic watched his team from the sidelines. Photo: AP
PSG started the day knowing a win against Rennes at the Parc des Princes would see them retain the Ligue 1 crown even if Monaco won, but news of the result in the principality was met with jubilation by Paris fans gathered for their match.
The result left second-placed Monaco seven points behind PSG with only two matches of the season remaining and means that Claudio Ranieri’s side will have to settle for the runners-up spot and automatic Champions League qualification.
PSG coach Laurent Blanc left Zlatan Ibrahimovic on the bench for the game against Rennes, with the Swede set to make his first appearance since suffering a thigh injury in the Champions League quarter-final, first leg against Chelsea just over a month ago.
Without Ibrahimovic, Paris have toiled in the league, losing at Lyon last month and then missing a chance to wrap up the title when they had to settle for a 1-1 draw at Sochaux 10 days ago.
However, their dominance of Ligue 1 has been almost absolute, and they have not been off the top of the table since October.
Helped by Ibrahimovic’s tally of 25 goals, they have already set a new record for the most goals scored in a Ligue 1 campaign and are on course to break the record for the most points.
The Swede has been a key player for the French side. France’s player of the year in his debut Ligue 1 season in 2012/13, he has been even better this time around. He leads the Ligue 1 scorers’ charts with 25 goals and has 40 goals in all competitions, breaking the previous club record of 39, set by the Argentine Carlos Bianchi in 1978.
The 32-year-old is irreplaceable and scored hat-tricks in wins at home to Nice and away to Toulouse. He has also provided 11 assists, the most in the division behind James Rodriguez of Monaco.