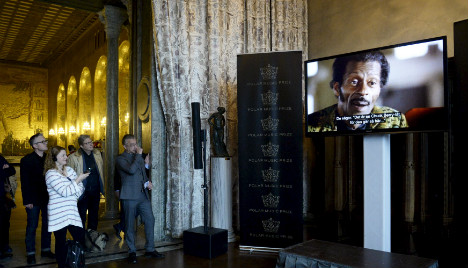 "The parameters of rock music were set one day in May 1955, when Chuck Berry recorded his debut single 'Maybellene'," read the prize citation for the 87-year-old son of St.Louis, Missouri.

"Chuck Berry was the rock'n'roll pioneer who turned the electric guitar into the main instrument of pop music. Every riff and solo played by rock guitarists over the last 60 years contains DNA that can be traced right back to Chuck Berry."

The Polar Prize was created in 1989 by the manager of Swedish band ABBA and is awarded annually to one contemporary musician and one classical musician.

The 2014 prize is shared between Berry and US theatre and opera director Peter Sellars.

"Peter Sellars has depicted everything from war to famine to religion and globalization," read the prize citation.

"Sellars has set Mozart in the luxury of Trump Tower and in the drug trade of Spanish Harlem, turned Nixon’s visit to China into opera and set Kafka’s obsession with home cleanliness to music. Peter Sellars shows us that classical music is not about dusty sheet music and metronomic precision."

The  awards were announced on Thursday morning and and will be presented by Sweden's King Carl XVI Gustaf on August 26th.