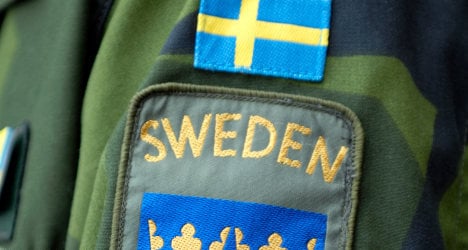 Photo: TT
The defence ministers of both Sweden and Finland signed an agreement on Tuesday to conduct a study aimed at ensuring stronger military ties.
Sweden's and Finland's defence ministers, Karin Enström and Carl Haglund, inked the deal in Helsinki. The plan will enable both armed forces to have access to each other's military bases.
Both Enström and Haglund said the deal would shore up the two nations' ability to deal with "crisis management".
Neither made any direct mention of the recent crisis in Ukraine, although experts have argued that Russia's antics in the region may have accelerated the alliance.
"This is no coincidence, but it could have happened even without it," Mike Winnerstig, a member of the Royal Swedish Academy of War Sciences (Kungliga Krigsvetenskapsakademien), told The Local on Thursday.
It's not a pact by any means, he said, but an insight into the possibility of forming mutual military units.
"The problem is the Swedish Armed Forces are very differently structured to Finnish and both have their own problems. In the case of Sweden it's a problem of quantity,"  Winnerstig added.
He pointed to Sweden's defensive manpower getting cut by 90 percent over the past 15 years – "quite a cut by any measure," he said.
"It means we need more of almost everything to be able to defend ourselves. We can't defend ourselves any more against any kind of sophisticated military attack."
Sweden's defence capabilities have been under the microscope before. Early last year, the commander-in-chief of the armed forces, Sverker Göransson, said that Sweden’s scaled-back military meant Sweden could only defend itself for one week if it came under attack.
"Of course it's a concern," Winnerstig said.
"Especially now in terms of the Ukraine situation. But things are changing here. Fifteen years ago our decision makers said there is never going to be any more threat on Swedish territory in our lifetimes. They decreased the defence budget dramatically by zillions of Swedish kronor."
The result? At best, a few thousand readily available Swedish troops, the expert guessed.
Sweden's army is already almost fully compatible with Nato standards, more so than some Nato countries, Winnerstig pointed out, adding that Sweden had been part of Nato operations since the Bosnian war in the early nineties.
The problem is that Sweden is not at the decision-making table, he argued, adding that he has been a long-time advocate of Sweden joining Nato.
"For Sweden, the whole [neutrality] policy became an ideology in the seventies, especially for the Social Democrats and their leader Olof Palme.
"They became so enamoured with the policy of neutrality that they turned it into something else. It used to be a way to avoid being attacked, which was successful during the two world wars, but in the 70s and 80s and their political environments, neutrality became an ideology and part of Sweden's identity," he said.
"For most Social Democrats and several others today, being a Swede is being neutral no matter what. It doesn't matter if it's completely out of touch with reality. I mean, who are we going to be neutral against?"
Sweden formally discarded neutrality in 1995 when joining the EU anyway, he added.
"But the notion stayed in peoples' minds. They think that to join a military alliance, regardless of whether it's Nato or something else, is a bad thing to do. It's against our national identity."
Back in Helsinki, Haglund and Enström were keen to maintain that the renewed partnership was about peacetime stability. They said it also demonstrated a willingness to support each other in times of crisis.
"The fact that we establish joint units and allow one another to use our airbases and ports conveys a strong message of our willingness to work together," said Haglund.
The finer details of the agreement are still being ironed out with conclusions on the alliance to be released next January.