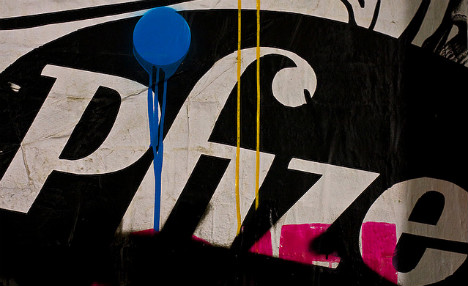 Street-art Pfizer logo in Berlin. File photo: Ben Frost/Flickr
"We've devoted huge resources to research in the life sciences and other areas that have been very important to this company," Reinfeldt told the TT news agency on Thursday. Anglo-Swedish AstraZeneca and the remaining pharmaceutical companies in Sweden have also told the government that they need its continued support.
"We obviously want to ensure that this influx of taxpayer money will lead to more jobs and development in Sweden," the prime minister said, as he in large part repeated concerns voiced by Finance Minister Anders Borg in Brussels on Wednesday.
"We have negative experiences from Pharmacia (which US firm Pfizer acquired in 2002). The prospectus detailed that it would mean jobs and investments in Sweden which we don't think they lived up to," Fredrik Reinfeldt told the TT news agency.
Swedish pharmaceutical industry expert Torun Nilsson said in an interview with The Local on Monday that the Brits shared the Swedes' concerns for the future of jobs and investment if the US giant returns with yet another bid after its third takeover offer was rejected by the board last week.
Nilsson explained that AstraZeneca's fate will ultimately be decided by its investment fund shareholders.
"Sweden's a bay in the global sea of capital. Funds own a lot in the global market and the fund managers are counting on a return," she said. "Three to four big funds are the biggest AstraZeneca owners and they'll have to (give in). They can't go against the interests of the fund investors."
At present, Sweden has one of three remaining AstraZeneca research sites, in Mölndal in western Sweden. It was once the home to an an independent drug company, in turn bought up by Astra, where researchers developed the heart-burn drug Lozec.

AstraZeneca research sites in Lund and Södertälje have already closed down, a fate shared by much of Sweden's once-proud pharmaceutical industry.

Fredrik Reinfeldt explained on Thursday that his government was trying to divine Pfizer's intentions.

"We have many questions about what this set-up is aimed at and the type of relationships on offer," he said.
Of particular concern is the fact that Sweden does not feature on the Pfizer map of research considerations in the case of a successful merger.
"This causes the greatest concern. We should also remember that Sweden stands out as one of the countries with the highest share of GDP spent on research, so it can't really be that, but there are presumably other considerations," Reinfeldt said.