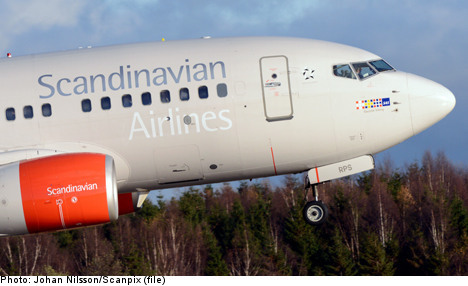 According to a Sveriges Television report, the incident occurred on March 3rd just 50 kilometres south of the Swedish city of Malmö – home to over 300,000 people.
The plane was reportedly a Russian Ilyushin 20m military aircraft used for signals surveillance. The two aircraft are reported to have passed by each other a mere 90 metres apart.
The Swedish Accident Investigation Authority (Statens Haverikommission) has reviewed the incident and decided against opening an investigation into the matter.
"We have let the matter go. Firstly the incident occurred over international waters, moreover the plane was Danish registered. This means that it is outside our area of ​​responsibility," Jens Olsson at the board told the TT news agency.
READ ALSO: 'Sweden hasn't been neutral since 1995'
According to Olsson, the Danish Accident Investigation Board (Havarikommissionen for Civil Luftfart og Jernbane – HCLJ) has also decided against investigating the matter.
The SAS flight SK 681 had just taken off from Copenhagen's Kastrup airport bound for Rome when the crew received information that an unidentified craft was in their path and which had not shown up on their in-flight warning system.
Jens Olsson explained that he believed these types of events to be rare. While he declined to speculate on the likelihood of an airborne collision, he described the situation as an "unpleasant experience".
Lieutenant Colonel Stephan Persson Tyrling, head of the air operations section of the National Defence University, opined that 90 metres is to be considered very close and classified the incident as "very serious" .
"The pilots in the civilian plane had spotted it, but with a little poorer visibility you don't know what could have happened," he said.
According to Persson Tyrling, Russia has built up its military capabilities in recent years with an increased presence in the Baltic states. He cited an incident last autumn when Russian bombers carried out attack exercises against Sweden.
READ ALSO: Swedish 'honeytrap' failed to catch Brezhnev's son
He added furthermore that Russian military aircraft had broadened their field of operations since the days of the Cold War.
"South of Bornholm was about what you could imagine then. They didn't fly much further west," he said.
He however expressed understanding that the Accident Investigation Commission elected not to pursue the matters saying that he doesn't believe any crime to have been committed as the Russian aircraft was in international airspace.