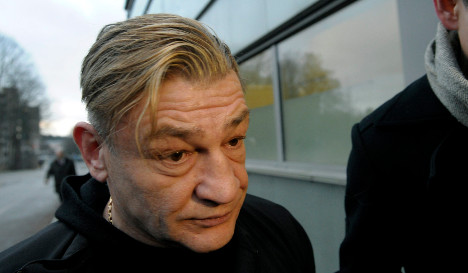 Mille Markovic gained notoriety as a source for an unauthorized biography of Sweden's King Carl XVI Gustaf. Photo: Janerik Henriksson/TT
Markovic, a notorious Stockholm gangster, was shot dead in January this year. He was shot four times.
A 27-year-old man was arrested on Tuesday afternoon in connection with the death. He has previous crimes to his name, including a four-year prison sentence for robbery.
The man is the second to be held by police in two days in connection to the murder. On Monday, police arrested a 54-year-old with a long history of crime, including being sentenced for four and a half years for narcotic crimes.
Police have kept tight-lipped about the two men, and would not comment on whether there were more suspects at large.
Markovic had had his share of run-ins with the law, often making headlines in the process. He was sentenced to prison on three separate occasions between 1995 and 2009 following convictions for bribery, tax evasion, violating weapon laws, and drug crimes. He was most recently in the news in December when he was acquitted on charges of conspiring to murder his former business partner following a shooting at Club Privé in May 2013.