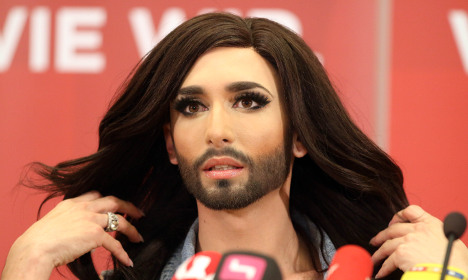 Austria's Eurovision entrant and beard embracer Conchita Wurst. Photo: AP
If there’s one word on, over and around everyone’s lips right now, it’s "beard". You couldn’t open your eyes over the last few weeks without seeing a certain bearded gent/lady beaming at you from inside a skin-tight sequined dress. And now, after Conchita Wurst’s dramatic Eurovison victory, we’re sure to be seeing her beard/mascara combo on our screens for a good while longer.
Conchita, however, might be too late, because all across Europe, a great change is already underway. Borders are being redrawn, priorities reshuffled, and long-held beliefs are being tossed out like baby-flavoured bathwater. What appeared impossible has finally come to pass, and no amount of Eurovison sequins can halt it. Ladies and gentlemen, girls and boys, we have finally reached Peak Beard.
Yes, it seems that ridiculously expansive facial hair is on its way out. After five years of watching young men morph into feral lumberjacks, making Stockholm look as if a massed invasion by 1970s folk bands were underway, the beard is finally past its cool-by date. The signs are everywhere. Dapper men are sporting twirly moustaches. Youthful TV presenters are clean-shaven as altar boys. Footballers are no longer slathered in scrubland as they tell us how well/badly it went and why. And fashion posters for fancy shops are now awash with fully-bearded men, allowing us to see how daft they look and how mainstream and sell-out it’s all become.
But the death-knell, the thing that beats the nail firmly into its hairy coffin, is that cool New-Yorkers are no longer sprouting surreal amounts of facial hair. And when cool people in New York no longer do something, trend-slavish Stockholmers are obliged to drop that same thing and run screaming from it, like cartoon ducks being pursued by a cloud of angry, pointy-assed bees. Off they go, any second now.
I remember, a few years back, when the Stockholm beard supernova ignited. I had returned to work after the summer holidays and for a while I was sure I’d wandered into an Amish horse market. Bearded men suddenly outnumbered the bare-chinned four to one. I sat through meetings where I was the only un-bearded man in the room. And stepping outside, I found you couldn’t cross a street in Stockholm without seeing men with facial hair reaching down to their nipples. They wandered Södermalm in herds, each hairy chin construction more daft and convoluted than the next. They whizzed by on their fixed-gear bikes and served us in trendy bars and cafes, with their smug beanies and arms engraved with tattoo doodles, all looking as if they owned the world and would do so for ever and ever and ever.
But they didn’t. The cruel wheel of fashion turned and now beards, at least beards on young men, have become sad. All over this town for the next few months you will hear the long scissors coming out, and after this summer the men of my office will slink back to work, all smooth and clean-shaven, and pretend that nothing has happened. There will be nods of silent agreement to never discuss the hairy mania of the last five years. It will have been a dream, a bristled Bobby Ewing stumbling, pasty and naked, from the shower. “Beards?” their quizzical looks will say. “What beards?”
And now, as the age of the beard limps to a close, it feels like a gesture of some kind is required. So I say let’s collect all the tonnes of facial hair that will tumble to bathroom floors around Stockholm over the next few months — every wiry curl, every fluffy ball of ginger and black — and use it to make a suitable monument. A great tangled beard it will be, fat and full and five metres high, with a pair of unfeasibly large black-rimmed glasses perched ironically on top.
And when that’s done, let’s go back to how it was, where people could wear beards because they want to, and not just as an ironic fashion accessory. Conchita Wurst may indeed have missed Peak Beard, but I prefer to see her as the vanguard of a new age, an age when people, male or female alike, can again bristle up and display their whiskers with the non-ironic pride they deserve.
The Beard™ is dead. So long live the beard.
Paddy moved to Sweden for love and stayed on for the pickled fish. He is a member of the Stockholm Writers’ Group.