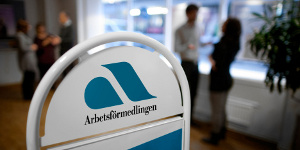 Photo: TT
Over the past decade and a half, tens or potentially hundreds of thousands of unemployed Swedes have fallen foul of the jobs agency paying out the wrong amount of money to jobseekers. Most have received too much money, but many have received less than they were entitled to.
The Swedish employment agency (Arbetsförmedlingen) must now decide how to untangle the mess and whether or not to demand refunds from thousands of Swedes who were paid too much.
"It's extremely serious that this has gone on for 14 long years," Employment Minister Elisabeth Svantesson told news agency TT. "I expect the issue to be investigated and fixed."
The agency has paid what is known as "activity support" to job seekers enrolled in different types of education or vocational courses. But many Swedes continued to receive pay-outs from other state agencies.
The glitch has been traced back to 1999, when the reporting system between the jobs agency and social security agency (Försäkringskassan) was adjusted. Authorities first realized that something had gone awry after they spotted another compensation error last summer. They estimated that 25,000 job seekers have been caught up in the glitch just since 2012.
"The absolute majority have probably received more in compensation than they should have from activity support," agency general director Mikael Sjöberg said.
But there were also job seekers who received too little compensation. Exactly how many remained unclear on Monday. But hypothetically it could have impacted some hundreds of thousands individuals since 2012.
"We don't dare give any numbers," said Sjöberg. "I can understand if there are a lot of people who are disappointed or upset."
The agency said it would not process demands for compensation.
"Neither we nor the social security agency will open up closed cases," the agency stated.
The minister, however, was of a different opinion.
"Both (agencies) must go back through every case and decide what to do. Both agencies will have to buckle down and do better in the future. It's extremely important for their credibility," Svantesson said.
But there could be others involved. Some job seekers may have received income-insurance pay-out (A-kassa) when it wasn't applicable. There was nothing stopping the insurers from asking for their money back, Sjöberg pointed out.
The jobs agency said it would now contact those who were paid too little from 2012 onward, but Sjöberg suggested it might be wiser not to bother asking for money back.
"Wrongs should be righted," Sjöberg said, "but not at any cost."
The Local/sr