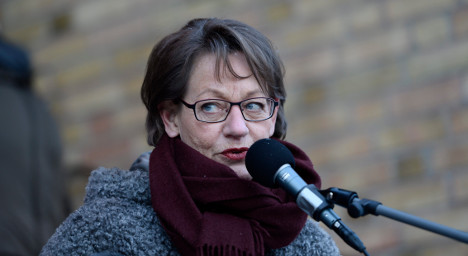 Feminist head Gudrun Schyman. Photo: Maja Suslin/TT
New figures on Monday saw Sweden's two largest parties enjoying the biggest hikes in voter support ahead of this month's European elections.
Compared with the last EU elections in 2009, the Social Democrats jumped 6.3 percentage points to 30.7 percent while the Moderates leapt 4 percentage points to 22.8 percent, according to a survey carried out by pollsters Ipsos and commissioned by the Dagens Nyheter newspaper.
The biggest winners, however, were the Feminist Initiative party, which enjoyed 4.3 percent of public support – enough for a seat in parliament – compared with their 2.2 percent in 2009.
The Feminist Initiative, headed by former leader of the Left Party Gudrun Schyman, has been rounding up support across Sweden by throwing "house parties" where Schyman promises to talk at any location where at least 25 people are gathered.
Jimmie Åkesson and the Sweden Democrats would also get an EU seat for the first time, according to the figures. The far-right party drummed up 5.7 percent of support, up 2.4 percentage points from 2009.
The Pirate Party, meanwhile, which currently boasts two seats in the EU parliament, saw a drop of 5.8 percentage points. Swedish Pirate MEP Christian Engström told The Local last week that the party was aiming for "ideally three" seats.
Elsewhere, the Liberals lost 5 percentage points to hit 8.6 percent.
Talking to The Local last week, Liberal Party politician Birgitta Olsson said "decent people" had to head to the polls this time around to uphold human rights, dignity, and democracy.
"We see a very militarily aggressive Russia, we see xenophobic parties on the rise, we see the core values of the European Union threatened in some countries," she cautioned.
Advanced voting for Swedes and Europeans living in Sweden has already opened. Polling booths close on May 25th.

TRAVEL NEWS
EU extends Covid travel certificates until 2023 but what does this mean for travellers?
Url copied to clipboard!