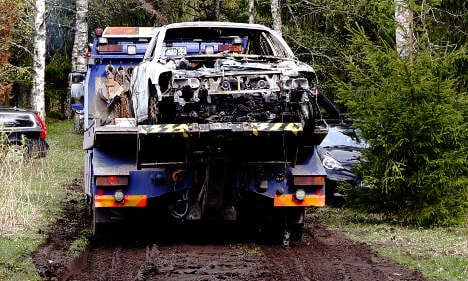 The torched vehicle is transported away. Photo: Pernilla Wahlman/TT
The car was found in Tierp, near Uppsala, on Sunday. A dead body was found inside the car and another outside.
"The person found outside the car is a man," Christer Nordström of the Uppsala police confirmed to the TT news agency.
Police said that the blaze was not related to a traffic accident, but added that they do not suspect any crime.
The bodies have been sent for forensic examinations, where they are hoped to be identified.
On Monday morning the Upsala Nya Tidning (UNT) reported that the deceased were likely a couple who were in their early eighties. The car, which was found on a deserted road near the woods, was registered to the man.