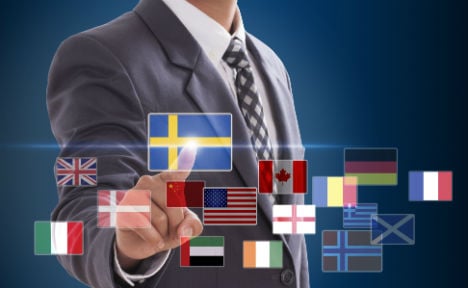 Fluency in a foreign language is just one of many assets immigrants bring to the Swedish workplace. File photo/Shutterstock

American game producer Ellen Williams moved to Sweden three years ago to take up a job with a company in Sweden’s blooming gaming sector and now works at King, the maker of global blockbuster Candy Crush.

The blend of non-Swedes and locals working together is key to the company’s success, she told The Local.

“I think any company would benefit from the different perspectives that foreign workers would bring. Our games are for a global audience, so having a mix of viewpoints and ideas leads to more interesting and fun outcomes,” said Williams.

After “jumping through hoops” to get a visa to work previously in the UK, she said the whole process was a lot smoother in Sweden.

This was the result of a 2008 change to the law that gave employers the right to decide for themselves if they wanted to hire somebody from abroad because of labour shortages. Previously, officials at the Swedish labour market administration would decide whether a visa should be granted, on the basis of labour market tests.

Now, proposals by the Swedish Trade Union Confederation (LO) to curb labour migration have caused concern among Swedish employers. LO wants employers to have to prove that Swedish or EU workers would not be able to do the job.

LO’s strong links to the Social Democrats mean its view could have a major effect if they win the next election.

Labour migration has certainly made Sweden’s workforce far more cosmopolitan: a recent report from employers’ organization Almega revealed that the employment rate for non-Swedes is at a record high, with 68% of those born outside the country now having a job in Sweden.

Between 2006 – 2012 foreigners accounted for 65 percent of the total increase of the number employed in Sweden during this period. Demand for workers in the knowledge intensive sectors such as IT, banking and engineering, has placed an onus on Swedish employers to go abroad and recruit the best.

“There is a perception often that foreign workers are out in a field somewhere picking berries. People don’t realise how much the economy has been boosted by Sweden being able to attract highly skilled foreign workers here,” Ulf Lindberg, head of Almega’s public affairs department, told The Local.

He added; “Sweden has become a rich country because of labour migration.”

LINK: WANT TO STOP THE CHANGES? MAKE A SELFIE HERE AND JOIN THE CAMPAIGN

Sweden’s economy recovered slowly in 2013, despite this the employment levels rose in an unexpectedly strong way in the services sector.

Workers in the knowledge intensive sector were responsible for over 60 per cent of the jobs created in the private service sector in 2013, 45,000 in total. Among these new employees, those born overseas play an important role

“The demand for more skilled labour has been on the rise for the last 20 years. We can estimate that as much as 75% of the employment growth in the private service sector in Sweden has come in the knowledge intensive industries,” Lena Hagman, chief economist for Almega, told The Local.

“But,” Hagman warned; “There is a shortage of skilled labour in these industries so Swedish companies need to look for labour abroad. There’s no way Sweden’s economy would be as strong as it is without labour migration.”

King (pictured below) is one of the Swedish companies to have benefited greatly from the input of foreign brainpower. In its Malmö headquarters the official working language of the office is English, in order to accommodate the multinational staff.

“It’s not the hard skills, per se, which foreigners bring to King as the local talent in Sweden is at a very high level of competence. More soft skills, a different way of approaching solutions to problems,” said Ellen Williams.

While King's Product Manager in Malmö, Henrik Sebring, said the company has a serious need for foreign brainpower – as the talent pool for the gaming industry is too thin in Sweden.

"It is incredibly important to us to hire foreign staff, as experienced workers from Sweden alone cannot sustain our planned growth. The gaming industry is still very small in Sweden compared to North America and the rest of Europe," Sebring told The Local.

He added that potential changes to labour migration rules would have certainly have a ripple effect on the rapid growth of the gaming giant.

"It would take a considerably longer time to staff up new teams and increase our studio organically. The experience we can bring in from other counties is also extremely valuable to us," said Sebring.

HAVE YOU MOVED TO SWEDEN TO WORK? TELL YOUR STORY!

Meanwhile in Stockholm technology specialists Tacton Systems employ a workforce of 130. A third of those come from abroad, or 16 different nationalities ranging from Japan to Afghanistan to be precise.

For a company like Tacton Systems, which has a major international influence, changes to the immigration rules could have a detrimental effect on business.

“The existing laws are already too cumbersome. For a mid-size company focused on exports, like us, a change in migration laws would have an impact. Put simply, having skilled foreign staff is a fantastic way to grow much faster,” Tacton Systems CEO Christer Wallberg told The Local.

Tacton services clients all over the world from its Stockholm HQ. Haruko Kato, who has been based in Sweden for over a decade, looks after its Japanese side of the business and feels very much at home in the capital.

“For companies to develop and plug into new territories they need people who know the market, and speak the local language. Sweden is a small country so there is a need to explore the global market. It’s also a very attractive country to live in as a foreigner, as the quality of life is very high,” she said.

For many companies, such as Tacton and King, there is a mutual exchange of languages. The foreign employee brings their ability to communicate in their mother tongue to the work place, with the company providing intensive Swedish lessons to help them adapt to a new environment.

As Tacton CEO Wallberg said; “We don’t bring staff over here just for six months, we want them to be here for 10 years or more.”

The need for foreign workers is intensified by changes to Sweden’s demographics, with an ageing population making the country more reliant on hiring immigrants to fill the void. Native Swedes, aged between 25-64 no longer contribute to an increase in employment growth according to figures released by Almega.

Instead, its immigrants which have accounted for 65 percent of the employment growth in Sweden between 2006 – 2012.

Despite potential changes to curb labour migration Sweden remains an appealing place for skilled immigrants, like American digital marketing specialist Matthew Moroni. He quit his job in the States to move to Gothenburg to be with his Swedish partner and is currently weighing up his work options.

“I checked out the job scene before I considered moving here and I saw there were opportunities. If you have the right skills and qualifications then there are good jobs out there even if you don’t speak Swedish,” he said.

WANT TO STOP THE CHANGES? HOW YOU CAN HELP

Labour migration looks set to be an election issue ahead of September’s vote. LO is currently lobbying the Social Democrats to alter existing legislation if they get into office.

Such alterations would have a negative effect on the Swedish economy and lead to an inevitable ‘brain drain’ said Almega’s Lindberg.

“Many companies are situated in Sweden because of these current laws, but the fear is they could leave just as easily. Sweden needs to compete with other countries for skilled foreign workers and to do that we have to be an attractive place to come to,” said Lindberg.

He concluded; “We have to have global recruitment and open borders.”

WANT TO MAKE A DIFFERENCE? STAND UP AND BE COUNTED!

This article was produced by The Local and sponsored by Almega