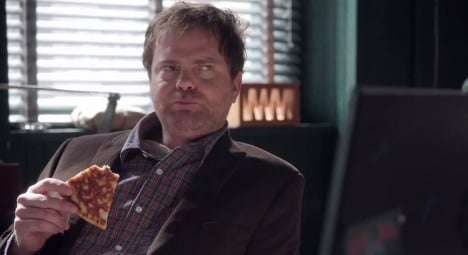 Actor Rainn Wilson in the Fox trailer for 'Backstrom'.

Yet another Swedish crime novel is set to hit the international scene next year, as Fox released the official trailer on Monday for its 2015 series Backstrom, based on a series of books by Swedish author and renowned criminologist Leif GW Persson.

American actor Rainn Wilson, better known as Dwight in the American version of The Office, plays the title character – an alcoholic, racist, and self-destructive cop. While the original books were set in Stockholm's Södermalm, the new US version is set in Portland, Oregon.

Wilson, who was nominated for an Emmy for his work in The Office, is a 48-year-old Seattle native who got his first taste of crime TV as a "supermarket guy" in an episode of CSI.

Ladies and Gentlemen, I give you…. (drumroll)… #Backstrom!!! @BackstromOnFox http://t.co/aFxEoHB22Y

Both Wilson and Persson are pleased with the results, with the actor tweeting his excitement over his new character and the author joking that he can finally quit his job.

"Now I can quit as a column writer," Persson told newspaper Expressen. "I have sold TV shows in Sweden too, but the pay (in Hollywood) is totally different."

Author GW Persson produced the show along with Hart Hanson, the producer of  hit series Bones. American TV network CBS bought the rights to the series in 2012, but dropped the show after the pilot was released. Fox then announced in January that they had bought the rights for 13 episodes. Set to premiere in spring 2015, the series also features actors Genevieve Angelson, Page Kennedy, and Kristoffer Polaha.

Backstrom follows in the footsteps of a host of Swedish crime fiction that found new fame abroad thanks to international remakes, including Wallander, the Girl With the Dragon Tattoo, and more recently, The Bridge. TV Network ABC has also purchased the rights to Exposed, an adaptation of Liza Marklund's series about crime reporter Annika Bengtzon.