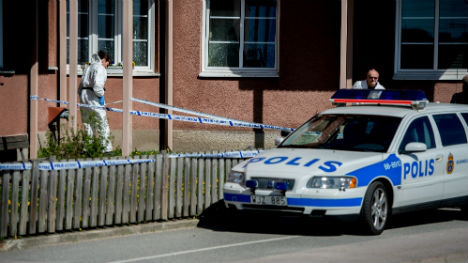 Police seal off the scene in Karlskrona following the discovery of an eight-year-old girl who was pronounced dead in hospital. Photo: Anna Sunesson / TT
An eight-year-old girl, called Yara by the Swedish tabloids, was found in a critical condition at her southern Sweden home in early May. She died later that day in hospital. Her legal guardians, a man and a woman, were both arrested on the suspicion of murder.
On Tuesday, the principal at the child's school was suspended.
The Karlskrona municipality confirmed that the principal knew there were troubles at home, but had chosen against sending a formal notification to the social services.
"He was aware that there was a case and that she had a guardian. But he was satisfied with the information and never expressed his official concern," Maria Persson, head of the children's and youth services in Karlskrona, told the Aftonbladet newspaper.
The paper revealed that other teachers at the school were also aware of the abuse, but that it was ultimately the principal's responsibility to act.
The deceased child's father, who lives in Gaza, said that hearing the news made him feel "even stupider".
"So many people seem to have known about Yara's situation without saying anything to us. How could they leave her in the lurch like that?" he told the paper.
The principal will now undergo a paid suspension until the investigation is over.
The girl was found in a critical condition on May 1st. A neighbour had previously contacted police after suspecting the girl was being abused.

Police are yet to reveal any further details about the crime.