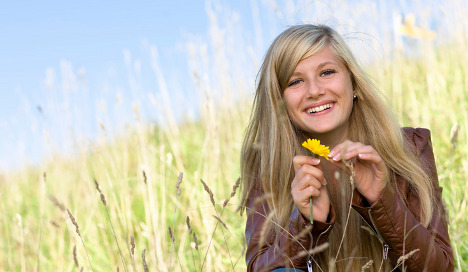 Photo: Ulf Huett Nilsson/Imagebank Sweden
All but 3 percent of Swedes are happy with their lives. At least, that's according to an EU report published on Tuesday.
"I'm astonished by the results," Swedish anthropologist Gillis Herlitz told The Local. "Swedes nowadays complain about everything."
The report revealed that Swedes were the most positive nationality in the EU when it came to both life satisfaction and perceptions of immigrants.
"On the other hand, it's always been that way in Sweden," Herlitz remarked. "Everything is fine, one should not whine or complain. We can only talk about pleasant things."
The information was gathered through interviews conducted across the EU between March 15th and 24th. Each survey included questions on political interest, faith in the EU, national identity, and values. One question challenged interviewees to rate how happy they were with their lives, with multiple choice options ranging all the way from "very satisfied" to "not at all satisfied".
In Sweden 52 percent of participants answered that they were very satisfied with their lives, and another 45 percent were fairly satisfied. A total of 97 percent responded positively, tying with Denmark at the top of the EU. Sweden was the only nation in which not even one percent responded "not at all satisfied".
But what does it mean to a Swede to be "satisfied"?
Herlitz, who has studied Swedish culture extensively and published a book called Swedes: The Way We Are and Why, suspects the answer may lie in deep-rooted cultural norms.
"If I'm not happy with my life in Sweden, then I'm saying something about myself," Herlitz explained. "Sweden is a society where everyone is expected to make his or her own way. Of course you receive support from the authorities. But if I say that I am very dissatisfied with my life, then I haven't really tried. It falls back on each individual."
Ninety-one percent of Swedes in the EU report also agreed that "immigrants contribute a lot to Sweden", a number significantly higher than any other nation. Luxembourg was the second-most positive, with 79 percent of respondents viewing immigration favourably. The EU average was much more divided with 48 percent agreeing that immigration contributes to society and 45 percent disagreeing.
Forty-four percent of Swedes "totally agreed" that immigrants contribute significantly to society, and 47 percent "tended to agree." Only two percent answered that they "totally disagreed."
Again, Herlitz suspected some of the dramatic difference could be attributed to the Swedish psyche.
"My first thought is that fear of strangers and other cultures is taboo in Sweden," Herlitz told The Local. "And with the growing prominence of the Swedish Democrats, who have brought up some very uncomfortable issues, it's more of an issue than ever. We Swedes must be politically correct. We must not appear racist or xenophobic."
But he clarified that it's not just about appearances, and that the results are likely due in large part to Swedes' openness.
"I think most Swedes have had good experiences with other cultures. Swedes are a very curious people, curious about the world and other ways of doing things."
The document presented statistics about public opinion in all of the European Union's 28 member states for a total of 27,932 interviews, including 1,016 Swedes.
The number of interviews from each country corresponded to the country's population in proportion to the EU as a whole. Sampling points for each country were drawn systematically to represent both rural and metropolitan areas, and addresses were drawn from "random route" procedures. The participants, all above age 15, were selected at random from each household. Interviews were conducted face-to-face in the participants' homes and native language.
Solveig Rundquist
Follow Solveig on Twitter.