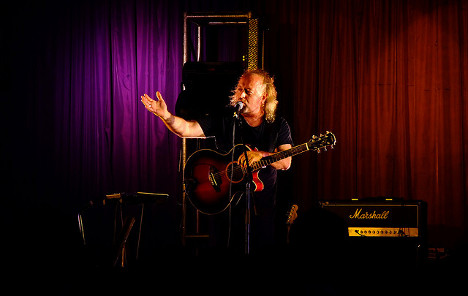 Bill Bailey on stage. File photo: Nic Redhead/Flickr
Bill Bailey knows Sweden so well that he could pass as a Swedophile. The British comedian has read every Wallander book, has strong opinions on Saga Norén from The Bridge, and managed to guess the country's population to within 100,000. And that's just the start.
Not bad for a British comedian.
And as it happens, Bailey is set to hit Gothenburg and Stockholm this week as part of his Qualmpeddler tour. So, before we probe the comedian about his interest in all things Sweden, what exactly is a "Qualmpeddler"?
"It's a word I made up. If you Google it, you'll always come to me. Quite handy, really," he says.
"To have a qualm is to have a worry – you don't often see qualm in the singular though, there are always several qualms. And a peddler is a door-to-door salesman. A qualmpeddler is really what a comedian is, it's a euphemism for stand-up comedy."
The tour has already begun and offers 17 live shows this month across Europe, two of which will be in Sweden. The comedian, who stars in QI, Black Books, and Never Mind the Buzzcocks, has a soft spot for Sweden.
"Of all the Nordic countries, Sweden has made the biggest impression particularly on British and western culture, certainly as I grew up," he explains.
"Whenever people tried to do Scandinavian accent it was always Swedish and very sing-songy… oooeeoooeeoo," he adds, sounding suspiciously like the Swedish chef from The Muppets.
But the Brit's knowledge of Sweden isn't limited to a children's TV show. He's visited several times, and was even in Stockholm last week. He also mentions a visit to Lund in southern Sweden that earned nothing but praise from him and his family, who loved "the cobblestones, the cafes, and the little streets" – a far cry from life in London.
But it's not just the under-crowded and quaint towns of Sweden that Bailey enjoys. He's a big fan of Sweden's approach to life in general.
"I applaud any kind of modernity, any attempt to try and live together in a better way," he says.
"When you look at the attitude towards women in Britain, we seem almost medieval by comparison," he continues. "It bothers me. I always get so wearisome of the rather slow progress we have here."
Does that make Bill Bailey a feminist?
"Well not being a woman…  it seems odd for a man to be a feminist. But to me it seems entirely natural. I get very cross, from time to time, when I find casual, everyday sexism. Women belittled and treated in a way that makes you think 'God!'
"It's like 'Really? Come on, it's the 21st century now. We got over this surely by now, lets move on'," he says.
And the comedian's admiration for Sweden doesn't stop at gender equality. He also finds himself a fan of the cultural scene.
In fact, he admits that he's obsessed with Nordic Noir. Among his favourites are The Bridge ('superb, beautifully filmed, and a brilliant character in Saga Norén'), The Killing, Henning Mankell ('I've gone through his entire oeuvre'), and Stieg Larsson ('extraordinary and preposterous').
But perhaps it's no surprise that Bailey – a classically trained musician – is most impressed by the music scene.
"I'm a big fan of some of the metal bands and I've always been a big fan of The Cardigans. She [Nina Persson] has a unique vocal style and lyrics, and they have such wonderfully bitter-sweet tunes," he says.
"That's where Sweden excels," he says. "In making shiny pop that dominates the charts."
Bailey dislikes when people try to separate popular culture from high culture. A person who only reads Dan Brown and listens to the charts misses out just as much as the person who reads only Paul Auster and listens to Shostakovich, he argues.
"I like to mix it up a bit, I'm intrigued by mass culture. I like to listen to the music like Avicii. This is the music my son and his friends are dancing to at the disco. Why is it capturing public attention? Is this a legacy of Abba's success? You can't deny it, it's a phenomenon and it's following the line of incredibly catchy pure pop."
But popular culture aside, for Bailey it all comes back to a system that seems to work.
"Sweden is seen to be a kind of utopia, a society, a country to aspire to be, and I think there's a great amount of truth to that. Other countries could learn from its egalitarian nature –  equality, the welfare, the story of general contentment and how the government has organized itself in sensible grown-up coalitions with cross-governmental cooperation," he says.
But surely Denmark and Norway, despite being smaller, can boast all this too?
"Well I suppose Abba has a lot to answer for here," he says. "I suppose there was a kind of very effective PR from Sweden that projected this country of beautiful outdoorsiness," he says.  "And of course, the excellent furniture."
Bailey's Qualmpeddler will be in Gothenburg on Friday and Stockholm on Saturday. More information here.