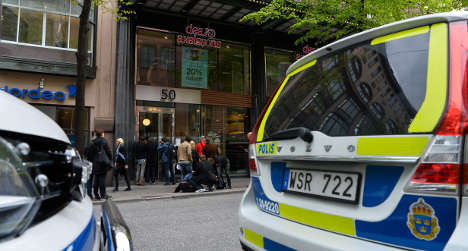 Police on the scene. Photo: Anders Wiklund/TT
Police were informed of the death at 7.30am on Wednesday, when a witness found the body in the stairwell of an office building on Kungsgatan. The police were told that the body "showed signs of assault".
Tove Hägg of the Stockholm police confirmed that they had launched a suspected murder investigation, reported the Aftonbladet newspaper. Police have yet to release any details of the man's identity.
The location is home mostly to businesses, with only one private person registered at the address.
More to follow