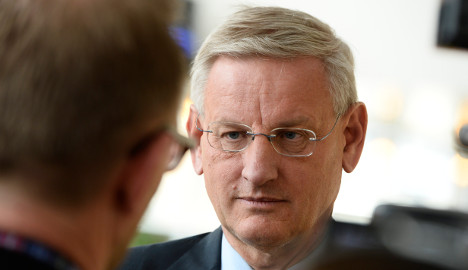 Photo: Pontus Lundahl/TT
"The crisis in Ukraine has shown how important it is that Europe stands united and strong when the European order of safety and security is threatened," Bildt said in a statement.
"This visit is an opportunity to show our presence and support, but also has a particular resonance given that we in Sweden and the rest of Europe will also be going to the polls on 25 May. The European Parliament elections will be hugely significant for the future of Europe."
Bildt, who will be in Ukraine on Thursday and Friday, was last in the area a month ago.
He is expected to meet representatives of the government, of civil society, and local business.
The visit is timed to coincide with the upcoming presidential election in Ukraine, and marks an opportunity "to discuss how Sweden and the rest of the world can support the country", Bildt's office said.
The crisis in Ukraine has worsened of late, with seven Ukrainian soldiers reportedly killed in an ambush on Tuesday in Donetsk.