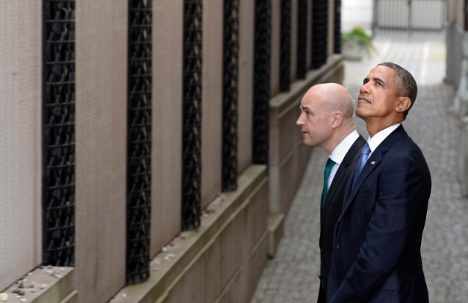 Reinfeldt and Obama during the US state visit to Sweden last year. File: TT

Many of you may know the story of Matthew Shepard a 21-year-old American university student who was beaten, tortured and left to die for one reason — he was gay. Tied to a fence in a rural area, he was found eighteen hours after the attack, mistaken as a scarecrow. Unable to recover from massive head trauma, Matthew died six days later. This senseless crime, motivated by hate and intolerance, was a tragedy that reminds us of the horror of hate crimes.

Matthew’s tragic fate is shared by too many people around the world simply because of whom they love. One of the most poignant and personally moving experiences I have had as ambassador to Sweden occurred this past December, when Matthew’s parents, Dennis and Judy, came to Sweden and shared an inspiring vision of hope through the non-profit foundation they established in Matthew’s name. Their courageous 11-year fight to pass anti-hate crime legislation in the US was recognized in 2009 when President Obama signed the “Matthew Shepard Act.”

Saturday marks International Day Against Homophobia and Transphobia (IDAHOT). It marks the occasion in 1990 when the World Health Organization removed homosexuality from its International Classification of Diseases. As we stand in solidarity with LGBT family members, co-workers and friends, it’s imperative that we stand up to the incredible ideological regression occurring in parts of the world where governments are using state sponsored media to breed hate and invoke fear.

No country is immune to hate and the evil ideology that provokes violent attacks. Discrimination against lesbian, gay, bi-sexual, and transgendered (LGBT) individuals is a shared struggle that still plagues much of the world.

I recently met with the International Rainbow Leaders, participants in a program organized by RFSL that provides training and support for LGBT advocates who put their lives at risk to promote equality in some of the world’s most restrictive countries. Places where government arbitrariness and rhetoric not only deny fundamentals human rights, but silences, sometimes forcibly, any opposition. These courageous men and women are fighting intolerance so no one has to face a fate like Matthew Shepard.

Last September, President Obama and Prime Minister Reinfeldt stood side by side and affirmed their joint commitment to protect the human rights of LGBT persons globally through support of the Global Equality Fund. As but one example of that cooperation, the US and Sweden are funding the Rainbow Leaders program. The Fund assists civil society organizations in over 25 countries worldwide. The United States and Sweden are each preparing a $6 million contribution of new resources to support its efforts over the next three years.

Change is not easy and doesn’t happen overnight. But policy reforms and the supremacy of law over power eventually occur in societies that respect an open exchange of ideas, promote rule of law, and protect individuals who are willing to stand up for equality. America and Sweden were built on these shared values. During his visit, President Obama said, “We share a belief in the dignity and equality of every human being; that our gay and lesbian brothers and sisters must be treated equally under the law; that our societies are strengthened by diversity.” I’m proud that the US is moving in the right direction.

Last year, the US federal government recognized same-sex unions by opening up thousands of government programs and offering benefits to same-sex couples—a change that directly benefited several American diplomats working here in Stockholm. To be clear: At US Embassy Stockholm, we are anti-anti-gay. We’ve come a long way, but there is still more that must be done.

Attacks against the LGBT community, whether they happen in a small town in the US, or as they’re happening now on a regular basis in Russia, are affront to the fundamental values that define our societies in United States and Europe.

The fall of the Berlin Wall 25 years ago marked the end of the Cold War. It was a triumph for universal human rights and it demonstrated the power of people coming together and voicing opposition to moral and social injustice. Recent events in Europe, including the Russian government’s abhorrent treatment of the country’s LGBT community, as well as its illegal annexation in Crimea and the restrictions it is placing on freedom of expression, show we must remain vigilant. We cannot stand silent as fundamental freedoms are whittled away and people are singled out simply because of who they love. It is up to each of us to speak up, act, and be “anti anti-gay.”

Mark Brzezinski, US ambassador to Sweden