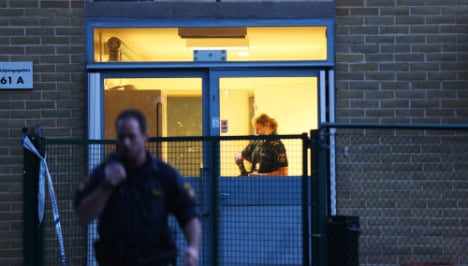 Photo: TT
Both men, who are 25-years-old, are previously known to police.
"Several spent shells have been found and the crime scene had been cordoned off for a technical forensic investigation," said Ulf Lörstad at Västra Götaland police.
The police have opened a preliminary investigation into murder or manslaughter, as well as attempted murder or attempted manslaughter. No suspects had been arrested by Sunday morning.
Police were alerted about the shooting on Erikslund school at around midnight.
"Several people have been taken in for questioning, but they are not suspected of the crime," Ulf Löstad said.
The police declined to comment on the condition of the injured man.
Saturday evening's shooting is the 20th in the Gothenburg area so far this year, according to a report in the local Göteborgs Posten daily.