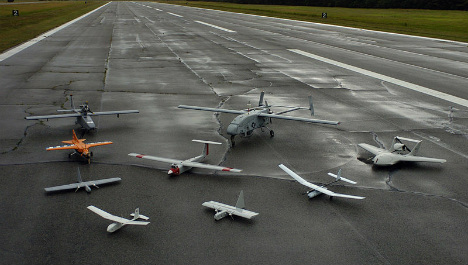 Unmanned aerial vehicles (UAV) or "drones". Photo: Wikimedia
The National Police Board (Rikspolisstyrelsen) has been awarded funds to investigate possible applications of the technology.
Examples of when the unmanned aerial vehicles could be of use include incidents such as oil spills and at crime scenes when forensic scientists could send in the drones to take pictures, reducing the risk of evidence being destroyed.
"Instead of barging in and destroy things, we would be able to document exactly how it looked," said Per Engström at the National Police Board.
The aerial craft could also be used for reconnaissance purposes, for example if someone is hiding in an apartment. The "drone" could then be sent up to peer through a window or take pictures of the apartment's interior.
The review will firstly establish if the technology is sufficiently capable and suitable for police purposes but also to assess if the use of the drones would meet the requirements of Swedish law. The project will run for three years.