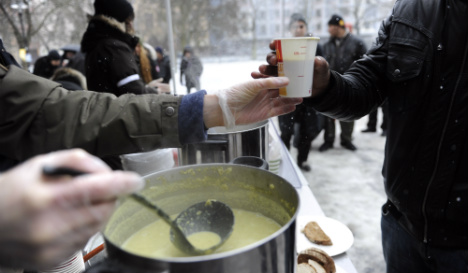 “Nazis can march freely and water is thrown on people begging, but to create a meeting place to challenge politicians and other people to actually do something is obviously very dangerous and terrible,” Elin Jakobsson at Soup Kitchen Stockholm said in response to the decision via social media.

The organization has been active for the past two years and works both as a source of food and a monthly meeting place for the city’s homeless population. The soup kitchen requires a police permit and on Monday its application for renewal was rejected.

“We always apply for a police permit and usually put up two or three tents where we give out free food. But now, all of a sudden, they have said no,” Jakobsson said.

The city’s traffic office expressed concern in its decision that “homelessness is often connected to assorted substance abuse and psychiatric illness”.

“In the view of the city it is not desirable to create meeting places for people with these specific problems in places frequented by the general public, especially in central city squares,” the ruling read.

Jakobsson however claimed that the soup kitchen had never had any disorder problems.

“This has been a meeting place. We have eaten and chatted together,” she said.

“We don’t do this to be kind, we do this because we can’t accept homelessness. This is not a thing “some” do for “others”, this is something we do together,” she said.

Jakobsson expressed anger at comments attributed by the Metro newspaper to Per Landin, the member of the traffic office responsible for the decision in which he expressed fears that the soup kitchen would develop into a “freakshow”.

“Ok. So you link homelessness with ‘freakshow’ and something dirty?” Jakobsson responded.

According to statistics from The National Board of Health and Welfare (Socialstyrelsen), there were 4,100 people recorded as homeless in Stockholm in 2013 of a total of 34,000 countrywide.

Of these 34,000 some 13,000 were recorded as having substance abuse problems and 10,200 were suffering from psychiatric conditions.