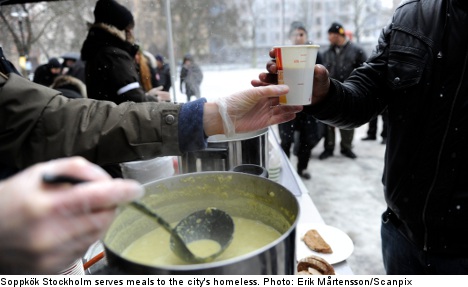 It wasn't long after the story broke that City Councillor Ulla Hamilton tweeted that the decision to close a soup kitchen would be reversed.

"The statements denying permission for the Medborgarplatsen soup kitchen are unacceptable. Of course they'll get permission," she tweeted.
On Monday, her colleague Per Landin, the member of the traffic office responsible for the decision, expressed fears that the soup kitchen which had been in operation for two years would develop into a “freakshow”.
"There is a risk of a freakshow. There is a risk that the place will be transformed into a zoo," Landin told the Metro newspaper.
A spokesperson at the traffic office told the TT news agency that Landin's comments reflected nothing more than "the views of a single employee".
Monday's ruling had meanwhile left organizers seething.
“Nazis can march freely and water is thrown on people begging, but to create a meeting place to challenge politicians and other people to actually do something is obviously very dangerous and terrible,” Elin Jakobsson at Soup Kitchen Stockholm said in response to the decision via social media.
Authorities said in a ruling that the location had become undesirable as it often functioned as a meeting place for unwanted characters, as “homelessness is often connected to assorted substance abuse and psychiatric illness”.
“In the view of the city it is not desirable to create meeting places for people with these specific problems in places frequented by the general public, especially in central city squares,” the ruling read.
According to statistics from The National Board of Health and Welfare (Socialstyrelsen), there were 4,100 people recorded as homeless in Stockholm in 2013 of a total of 34,000 countrywide.
Of these 34,000 some 13,000 were recorded as having substance abuse problems and 10,200 were suffering from psychiatric conditions.