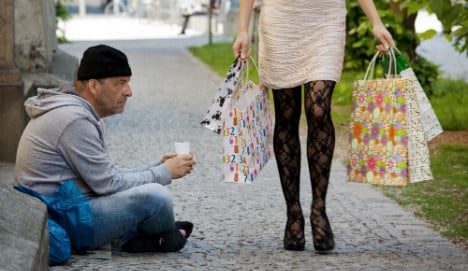 Beggar and woman with shopping bags: Shutterstock
French economist Thomas Piketty has gained significant attention for his new book Capital In The Twenty-First Century, recently translated into English after its original publication in French last year. The focus of the book is the issue of economic inequality. One of the main points is that wealth tends to be much more unevenly distributed than incomes.
Piketty fears that capital amassed during previous generations will grow faster than the economy as a whole, so that a small handful of families end up owning much of the wealth. If this happens, the French economist argues, "the past devours the future".
Much of our knowledge about wealth distribution comes from recent academic studies. And their results are quite shocking. One of the more ambitious studies of wealth distribution has shown that Sweden has the most uneven wealth distribution amongst the seven countries for which data exist. Why is it that Sweden, which has long had an equal distribution of incomes, has an unusually unequal distribution of wealth?
The explanation lies in the fact that many Swedish households have limited or no privately held safe nets.
A report by the Swedish Taxpayers' Association (Skattebetalarna) from 2009 showed that around 30 percent of Swedish households had negative, or zero, assets. Another roughly 20 percent of households had asset levels that corresponded to around one month's salary for a normal household. The low level of household savings in Sweden has likely resulted from a situation where families have relied on the public sector to provide an all-inclusive safety net. However, it never hurts to have some savings in addition to public insurance systems.
Encouraging private savings amongst the broader public is one way to combat inequality. Society can in many ways benefit from a situation where ordinary people control a significant share of the capital. The ability to rely on your own savings, or borrow from friends, for example, increases the possibilities of realizing a business venture. And in the long-run even moderate investments can give a healthy contribution to the family budget.
There are ways for politicians to encourage savings among the broader public. Legislation could for example allow young people to deduct taxes from the first nest egg they save for investments in the stock market, in their first home or in their first business. The first step should be to open up a debate about how a more egalitarian capital ownership can be fostered.
After all, much of the rise of income inequality in the world is driven by the fact that those with high incomes invest much of their money, and gain long-term incomes from this investment. Shouldn't a political response be to encourage broader groups to engage in investments?
Nima Sanandaji is a regular op-ed contributor to The Local. His latest book is called “Renaissance for Reforms”, co-authored with Stefan Fölster.