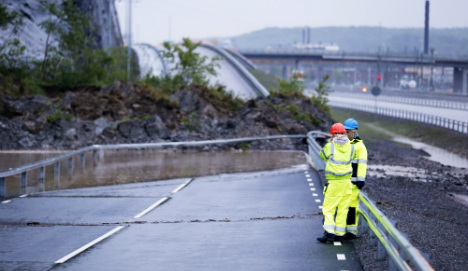 "The roads are open and the trains are going. There are delays, but the routes are open," said Kalle Jansson at the Swedish Transport Administration (Trafikverket).

The downpour caught many people by surprise on Monday and the emergency services reported a very busy evening in the county of Västra Götaland, with flooded roads and homes.

The areas which were the hardest hit included Lerum, Ale and Kungälv, and parts of Härryda and eastern Gothenburg.

Near Djupedal in Nödinge a large amount of earth slid onto the E45 main road, leading to traffic diversions. None however suffered any serious injuries as a result of the storm.

Bohus resident Zijad Blazevic reported that his garage had flooded leaving his car submerged up to its windows. Blazevic had only recently returned from Bosnia where recent flooding has claimed over 40 lives.

"It's a big disaster with all the water in there," he told the TT news agency. "The water was a metre high in the garage last night".

Swedish weather agency SMHI meanwhile removed a class one warning (the lowest on a scale of three) for the north-east coast of Sweden, amending the forecast to rain showers on Tuesday.

After the rain will come the sun however with forecasts indicating a general brightening up across the country on Wednesday. As the weekend approaches SMHI has forecast that temperatures will reach a positively balmy 20-25C stretching all the way into the north.