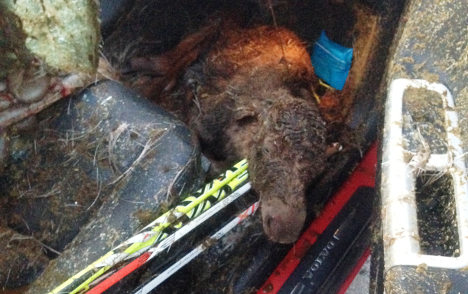 Photo: Jesper Modin
Jesper Modin, a well-known professional skier, was driving home to Östersund in northern Sweden when he headed over a hill and the sun caught his eye. Before he knew it, he was just metres away from a large elk standing in the middle of the road.
"It smashed into the windscreen and went tumbling over the roof," he tells The Local. "I was completely covered in glass and the elk's innards"
The 25-year-old Swede stepped out of the car and was convinced that he too must have been injured as he was covered in blood and guts. On closer inspection, he found he had only sustained a small cut to his hand.
The elk showed no signs of life.
A pick-up truck came to help the shaken skier and tow his destroyed Volvo back to the garage, 90 minutes away from the scene of the accident. There, Modin got the surprise of his life.
"I was about to grab some things from my glove compartment when I opened the car door. To my surprise, there was a little elk laying there… alive," he recalls. "The umbilical cord was still attached. I was so shocked that I slammed the door again."
"I thought, did I really see what I think I saw?" he says.
IN PICTURES:  See the elk and the scenes from the crash   WARNING: GRAPHIC CONTENT
With a friend, Modin went back to the car and opened the door to find a little elk calf alive, lying on the floor by the passenger seat. When the mother elk  collided with the car, her stomach contents had emptied into the car, including an unborn calf.
Modin hadn't noticed the calf in the immediate aftermath of the crash, which he attributed in part to being in shock and in part to the car's interior being completely covered in guts and glass.
"People don't believe me when I tell them what happened, they think it's the weirdest thing they've ever heard. But I just show them my blog with the pictures," he explains.
He called the police, who in turn called in a wildlife expert. While the Swede says he wishes the story took a happy turn at this point, the wildlife expert made the decision to put the calf down, explaining that it could never survive without its mother.
"It's a tragedy of course, and I wish I could say the elk survived too. But I'm just happy I'm alive, and so grateful to all the people who helped."
The story marks the second time in recent years that an elk has made an appearance in an unusual place. In September, 2011, a drunken elk was found stuck in a tree in western Sweden.