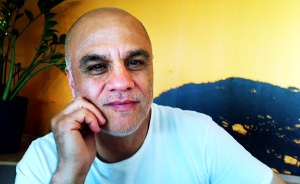 I don't think people ever intended for it to keep going on for so long. A lot of people saw the media, they wanted to be on film, so they kept burning stuff, and burning the school.

Nothing has changed, I still go to school, a lot of people still don't have jobs. We wanted to be heard, but they keep forgetting us. To get a job, my mum had to say she was from Kista, not from Husby, because people think we are idiots.

We wanted to start a revolution, but it didn't go so well.

When it was happening, I only saw it on the TV at work. My colleagues asked me 'Didn't you see anything? I said that I'd walked to the tube that morning to go to work and noticed nothing. I'm usually home when I'm home.

There are lot of people who are moving (from Husby). They've told me that it's not a good place for children but the children in our family haven't gotten into any problem.

I know most of the people here. Even if (the unrest) happens again, I won't feel afraid. Most of my friends don't have jobs. Without a job they don't have stuff to do so they start this shit, that was the problem last year. But most people came from outside.

The old man being shot by the police was one of the reasons, the main reason (for the unrest). I remember hearing of the shooting. I heard this guy took out a knife, instead of the police wrestling him down or pepper spraying him, they shot him. That was not a good thing.

Police treat people different here, they treat us differently because we are not from here. It's just what they believe. If they see a Swedish guy and if they see me, they'll treat me differently. Their tone of voice, they way they act, they'll come up to you and talk shit. They're a bit more macho. It is just what it is.

We became visible as a neighbourhood, even to politicians. Before, not a lot of Swedes came here. (To find out why there was unrest) they have to talk to the kids.

I don't know if the Swedish media should have focused so much on the burning cars. That's when they come here, when cars burn, but what about everything else that happens out here, there are so many nice things going on.