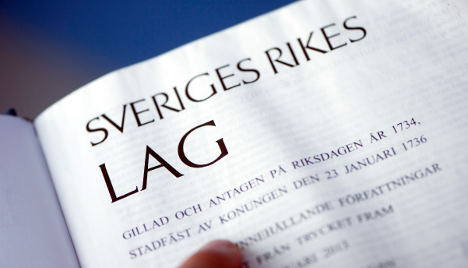 The Stockholm court tried the men for aggravated assault, attempted arson and intimidation. The men denied most of the charges but were found guilty of aggravated assault on two Slovak men in September 2013, whom the accused mistakenly thought were part of a demonstration by Swedish neo-Nazi group Party of the Swedes.

"Those charged are not 'ordinary' perpetrators of violence," district court judge Bertil Sundin said in a statement, handing down jail terms ranging from 14 months to two years to the five men aged 19 to 22. Two of the men received suspended sentences.

"The crimes would be unfathomable if you did not understand that they were an organized part of the activities of the Revolutionary Front (RF)," added Sundin, referring to the violent group that regularly targets neo-Nazi demonstrations.

During the attack, which the RF filmed, the victims were hit over the head and on the body with bottles, chairs, and a flowerpot.

All five accused were ordered to pay fines and compensation to the victims. A 20-year-old accused of having a leading role in the revolutionary group was ordered to pay 69,309 kronor ($10,500) and was sentenced to two years in jail.

The court said in its ruling that although the young age of the attackers was taken into consideration, the organized nature of the crimes led to stricter sentences.

"We are very unhappy with this judgement and will appeal it," the 20-year-old's lawyer told AFP, adding that there was no proof that the assaults had been planned in advance.

"Not in these cases where there was spontaneous violence between Nazis and anti-Nazis during demonstrations. My client has been condemned for crimes he did not commit… He had nothing to do with the violent attack on the second man."

Other members of the group were found guilty of attempted arson and of threatening a suspected Swedish neo-Nazi at home, painting "Nazi swine" on his house and leaving an axe wedged in the door.

In recent months, several violent clashes have taken place between neo-Nazis and extreme-left extremists on the margins of street demonstrations in Sweden, leaving several people injured.

A 35-year-old man was sentenced to six and a half years in jail last month for stabbing a neo-Nazi activist during clashes in Stockholm at an anti-racism march in December.