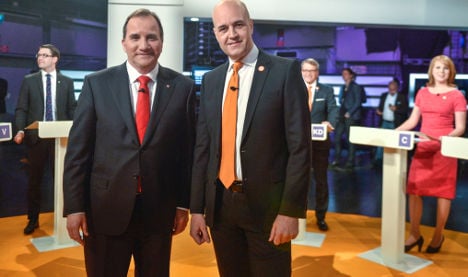 Löfven and Reinfeldt after a debate earlier this month. File: TT

Stefan Löfven and Fredrik Reinfeldt went head to head in a televised debated on Wednesday evening, but managed to have several points in common. Their debate focused in large part on the free movement of goods, labour, and services, but also touched on the euro.

"It's not on the cards," Löfven said,

In 2003 Swedes said no, but only just, to joining the monetary union.

"I voted yes but the Swedish people voted no," Löfven." We're not anywhere close (to reconsidering)."

The opposition leader declined to speculate when the issue might be on the agenda again, with the prime minister echoing his sentiment.

"The Swedish people said no in 2003 and on top of that they are very happy with how the krona is performing," Reinfeldt said.