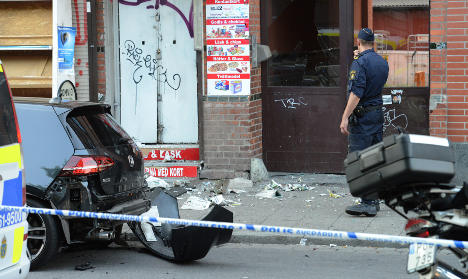 Photo: Johan Nilsson/TT
The explosion hit at around 4.15m on Friday, causing a car to catch fire and damaging the facade of a nearby store.
"The damage is substantial enough to make us believe that this is some form of explosive," Magnus Lefèvre of the local police told the TT news agency. "We can't say exactly what kind of object exploded, but it was a powerful blast."
The explosion mostly damaged a nearby car.
A woman working at a grocery story in front of the parked car said she didn't believe the shop was the target, but added that she was worried about the increasing crime in the city.
"It feels really unsafe here in Malmö," she told the Sydsvenskan newspaper. "It's getting worse and worse. Someone broke into my house last week, and now this."