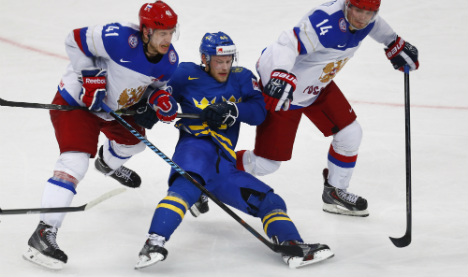 "We paid the price for our muddled performance at the very beginning of the match allowing the Swedes to grab the lead easily," Washington Capitals marksman Alexander Ovechkin said.

"For many of my teammates it was the first world's semi-final and naturally some of them were nervous.

"Luckily, we managed to come back to score twice before the first break and kept our lead through. Now we have just one match to play at the tournament and we will do our best to win it."

Ovechkin also praised Russia's goalie Bobrovski for his outstanding performance at the event in general and in the last four clash in particular.

"He (Bobrovsky) is without doubt more than a half of our team," he said.

"He's one of the NHL's top 'keepers and I consider him to be the best player of this world championship. Regardless of our field players' performance he always acts at his top boosting the team's confidence a great deal."

Sochi Games runners-up Sweden got off to a flying start as their forward Oscar Möller put them 1-0 up when the match was just 19sec old, sending the puck in between Bobrovski's pads from close range following Russia's defensive blunder.

Russia replied positively and began peppering Sweden's goalie Anders Nilsson with shots to pull the scores level at 13:25 when their forward Sergei Plotnikov wristed in a rebound after the 'keeper deflected Medvedev's initial shot.

"We had some very good opportunities to come back in the second period. I think Möller has got another chance to go upstairs but Bobrovsky has made a really nice save. Obviously we should have scored more."

In the gold medal match Russia will face either 2010 world champions Czech Republic or 2011 title winners Finland, who meet in Saturday's second semi-final.

The bronze medal game and the final will be played in Minsk on Sunday.