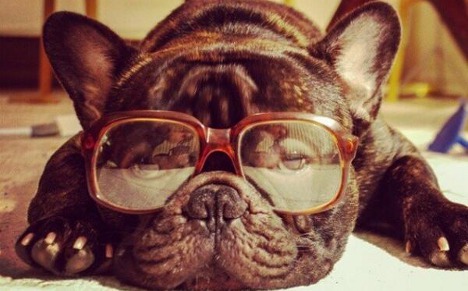 Boss. Enough said.
Boss the French Bulldog has so many Instagram followers that if they gathered together in a group, it'd be more populous than Uppsala, Sweden's fourth biggest city. Yes, he boasts 181,000 followers (and counting). That makes his account the most popular animal Instagram account in Europe, his owner points out.
After accidentally bumping into the hound in Stockholm's Medborgarplatsen – Boss curled a paw over his snout and appeared to pose when a camera phone appeared –  The Local asks the owner Olof five quick questions.
How did he get so popular?
After my friends responded well to my Facebook posts, I decided to start an Instagram account. After a few months, Boss reached the "most popular" section of Instagram. I was getting about 6,000 followers a month. But then the Metro newspaper wrote a story and it really boomed. I had 100,000 followers by December. Since then I've had 80,000 more. People really seem to like him.
Does Boss get recognized?
Not often, Swedish people are too polite to say anything though. Sometimes, someone has written on Instagram that they saw us out, and I get the occasional email where someone wants to confirm that they saw him. If I have my camera out, sometimes people come up and say hello too. Sometimes I do tell people that he's famous, but I'm a bit of a Swede there too. But he has been in news stories around the world on sites like Buzzfeed. His is the most popular animal account on Instagram in Europe.
How does Boss react to the attention?
He acts like a celebrity. He has something, that's for sure. And people who have photographed him tell me that they think he even poses in the pictures. Not for me though, I have to cheat the system and hold up a treat.
What next for Boss the wonder dog?
I'm working with some designers to get T-shirts made, and also looking at working with advertisers in the US. Swedish companies don't like spending money on things they don't know, like Instagram and Twitter. They prefer safe options like advertising in subways, for example. The Americans are much more open to this kind of thing.
Lastly, how can I get 180,000 followers on Instagram?
Get a theme and stick to it. Of course, you have to take good pictures and write a good caption. Then you can find relevant hashtags so similar people can find you. Maybe even like some pictures under the same hashtag so you can interact with your new found community. That's a good start.
IN PICTURES: The adorable, the cute, the vain, the tired. Boss strikes a pose