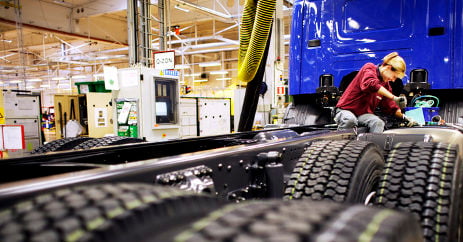 Malker Dahlstrand/Imagebank
Labour costs have been escalating in Sweden at a quicker pace than they have in the rest of western Europe and the eurozone, and the increasing strength of the krona has compounded the problem, a report by employer group Teknikföretagen stated on Tuesday.
"Swedish industries operate in a global market characterized by tough international competition," Teknikföretagen economist Anders Rune wrote in the report.
"The labour cost status is a key factor in determining where production will be located. It's very concerning that the costs in Sweden are rising so quickly in relation to other nations."
In Sweden the average hourly cost of labour is 342 kronor ($51.65), compared to a western European average of 297 kronor ($44.85) and a eurozone average of 280 kronor ($42.28). The report shows that only Norway, Switzerland, and Belgium have higher labour costs than Sweden. These statistics are on par with those of a March report which estimated an hour of Swedish labour at 359 kronor.
Western European labour costs include the UK as well as high-wage Sweden, Switzerland and Norway, and are generally higher than those of the eurozone. The report points out that Sweden's costs are "worryingly high".

“If you ask me how the situation will look many years from now, I'd say I was worried," Rune told The Local.

"Employment in the industrial sector is declining, and that is because of the costs. We (Teknikföretagen) and our partners in the labour market have made complaints to the Swedish Riksbank, which has for a long time held steering rates high above those of the euro, further strengthening the Swedish krona. This makes it hard to compete."

The krona's value dropped during the financial crisis in 2009, but has climbed since then, particularly against the euro. The krona rose 8.8 percent in value against the euro between 2011 and 2012, and climbed another 0.7 percent in 2013.

Niklas Hjert, head of negotiations at Unionen, one of Sweden's largest labour unions, agreed that the strength of the krona is a significant contributing factor to high labour costs in the country.

"Labour costs are of course something that we look at very closely when negotiating," Hjert told The Local. "In our last round of general negotiations in 2013 we didn't ask for very high wage increases because we took labour costs into consideration. But we could not foresee how the krona would continue to strengthen. It's actually quite unusual. Sweden is a small country and usually the krona weakens during rough periods."

Hjert added that the unusually high labour costs will have to be a focal point of Unionen's negotiations in 2016. However, he pointed out that the high costs cannot be pinned entirely on currency rates.
"The strength of the krona is of course a very important factor, but it's not the only factor, and we (at Unionen) can't do anything about it," Hjert said. "What we need to do is increase productivity in Swedish companies."
For several years the rate of increase in Sweden has been higher than in most competing nations. Between 2008 and 2012 Sweden's rate of increase for labour costs was 3.7 percent, compared to 2.8 in western Europe.
An hour of labour in Germany came in at 317 ($47.74) kronor, in France at 270 ($40.77), and in the USA at 235 ($35.49).
Solveig Rundquist
Follow Solveig on Twitter.