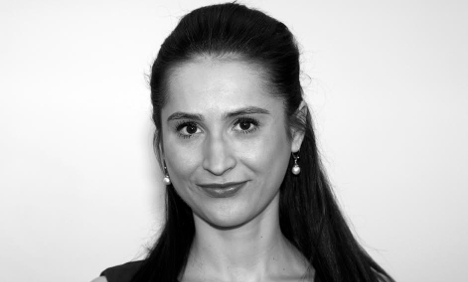 Natalia Brzezinski spent her early years ice-skating, honing her competitive spirit on the rink between the age of six and sixteen. She later studied international relations, with a stint in Copenhagen studying the EU.
Among other roles, she worked as an intern on the press team at the senate office of John Kerry before moving to Sweden over two years ago. Now, the wife of the US ambassador to Sweden, she calls herself "a women's activist and a proud mother seeking lagom". The Local finds out more.
What surprised you most about life as an ambassador's wife?
The fact that although not officially, you are representing your entire country, a historic president and what it means to be an American today. Of course, I always try to be a role model for my young daughter, but representing a country I love so much has a different kind of weight and responsibility. I think it surprised me how much that feeling moved and inspired me. I understand the meaning of public service in an entirely new way now.
On another note, it’s also a bit odd being boxed in a role that only has significance due to the person you’re married to. I’m married to an amazing man so I’m proud of him, but it was always a bit awkward for me to be introduced as “The Ambassador’s wife”, instead of “Natalia, a journalist”, for example. It also gives me a good laugh to be called “Madam”.
What surprised you most about Sweden?
The obvious answer is the darkness. But truly, it’s how authentically family-friendly and child-centric the society is. Children are included in everything, and nothing is taboo. One of the first speeches I ever gave on women’s empowerment was at Microsoft, and there were employees who brought their babies! It was fantastic, but not usual in other countries.
I also just love Stockholm. The way it has a nautical, urban and rural setting all in one short walking distance. Each morning when I go for a run now I have wave to off sheep or watch out for horses, it’s awesome. It really is an even more bucolic country than I would have imagined.
Do you have any Swedish role models?
Zlatan: I love how confident and bold he is. I wish I was as secure and self-assured as he is. I think especially as women, working and having families, we could use a bit more bravado. I was also a competitive ice skater for most of my life so I admire his athleticism.
Antonia Ax:son Johnson: She has “walked the walk” as a business leader and is breaking new ground in sustainability and diversity.
Astrid Lindgren: Pippi Longstocking was my idol as a little girl, and now she is my daughter’s. Astrid Lindgren created the strong, “take-no-prisoner’s heroine” who wasn’t a princess waiting for her prince. I love that. She has taught young girls that it’s great to be tough and not always follow the rules (some rules are made to be redefined.)
Raoul Wallenberg: He wasn’t afraid, and refused to be indifferent.
Swedes working at the US Embassy: I’m so proud and inspired by the multicultural team of employees working with my husband at the embassy. Some of the Swedes have been working there for decades, and their commitment to the Swedish-American relationship is incredible. It’s such an asset to have a strong wealth of knowledge about the local culture and environment. And they are just a lot of fun! The best ideas come from diverse teams, and as an observer, I feel that’s really maximized at US Embassy Sweden.
Favourite things about Sweden? Least favourites?
Favourites: Spotify, Avicii, shrimp salad, Djurgården, the archipelago, Arctic Char, casual fashion, the Nobel Prize and Polar Music Prize, the ability to ride the bus free when you’re with a child in a stroller, the global awareness of Swedes and Swedish commitment to human rights and gender equality
Least Favourites: Cold, darkness (Our first summer in Sweden boasted the coldest June day in 80 years), bike regulations (I’m still figuring out when I can bike on the sidewalk and when I cannot), as an open and vocal American there is one thing I both love and dislike depending on the day you catch me on— the “Law of Jante” and the occasional dislike of confrontation.
What can WE expect from the blog?
Honesty. Passion. Genuine curiosity and enthusiasm — perhaps a dash of boldness, creativity and hopefully a lot of variety and dynamism.
I’m so passionate about the things I write about and work on, and there are very few things I’m more interested in than intercultural exchange, comparing how things are done in one country versus another. In many ways, this role is perfectly in tune with who I am. I love people. I am so open to learning from all different types of people. And I hope this blog will be an extension of my own learning experience and personal metamorphosis.
What do YOU expect from it?
I want to grow with my readers and embark on a really fun journey. I hope I’m surprised and moved one day as I look back on a long and innovative set of blogs that tell a genuine story. I hope my daughter reads this when she is my age and it helps her remember her time in Sweden and understand who her mother really is.
Read Natalia's first blog post here and stay tuned to the blog itself here