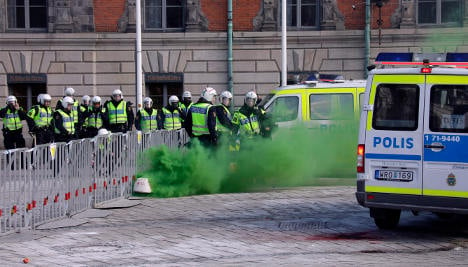 Johanna, 22, told the local Sydsvenskan newspaper that the police had asked her and her group of friends to show ID. The group was on its way to join an anti-racism demonstration in central Malmö on Saturday. While Johanna was happy to show her ID, the police then said they had to photograph the group. When Johanna refused, the police threatened to haul her down to the station. She instead complied.

The young woman has now reported the incident to the police, a move the Malmö officers welcomed – forwarding the case to the special unit of the prosecutor's office that looks at suspected breach of conduct within the Swedish police force (Riksenheten för polismål).

"There are different opinions within the office of what is needed (to justify) taking photographs," lawyer John Jörgensen told the paper.

Swedish police do film demonstrators, for example, when anti-racism protesters gathered in central Stockholm two years ago to protest a planned march by the visiting English Defence League. The latest case in Malmö, however, involved a group of young Swedes who had not yet reached the site of the demonstration against the Sweden Democrat party.

Jörgensen said Swedish police were allowed to take photographs for "crime prevention" and in cases of suspected crimes. He did not want to comment on the case of Johanna and her friends.

The young woman told Sydsvenskan she felt extremely ill at ease at having pictures of her circulating in the police database and not knowing what they would be used for.
Jörgensen said the police would be required by law to delete the images if they were taken without due cause.