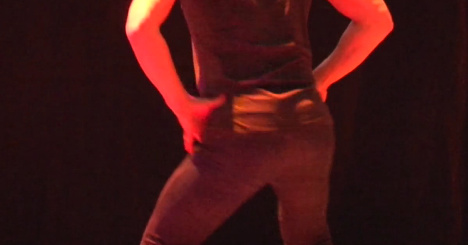 The CEO's dance. Photo: Dagens Nyheter (screengrab)
The Stockholm International Fairs and Congress Centre, known in Swedish as Stockholmsmässan or Älvsjömässan, is owned by Stockholm municipality and runs at a loss. But this didn't stop it from splashing out 130,000 kronor ($19,600) for the 50th birthday of the CEO Patric Sjöberg, the Dagens Nyheter (DN) newspaper has revealed.
The party came complete with a helicopter entrance for Sjöberg, a gift card for 5,000 kronor at an interior design shop, and live music from a Royal Swedish Opera pianist (8,750 kronor). The centre also paid for the helicopter (8,500 kronor), which nonetheless was cheaper than treating the CEO to dance lessons (12,500 kronor) with a star from Let's Dance, so he could perfect his moves for the crowd of workers. The centre explained at first that the pianist was an "external cost" and the dance lessons were "consultancy fees". While the news of the expensive party surfaced last week, the video of the dancing was only released to the public on Tuesday, after DN made use of Sweden's right of access laws, enshrined in the constitution, which state that any publicly-owned outfits have to make documents available to the public.
CLICK HERE: To see the video of the dance, courtesy of the Dagens Nyheter newspaper
Sjöberg, wearing a T-shirt that says "Too late to die young", can be seen gyrating his backside towards what appears to be some unenthusiastic applause and scant cheering from his junior colleagues. He then beckons his female dancing coach, who twirls around him before falling into the CEO's arms. The scene stirs memories of a scene from the television show The Office, when Ricky Gervais also puts on a dance for the entertainment of his employees.
See Ricky Gervais dancing in The Office