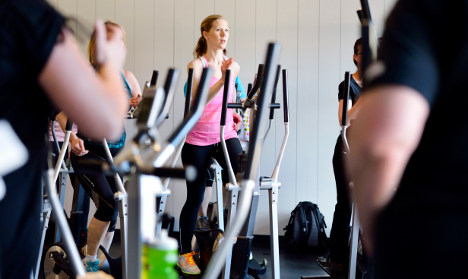 Upon arriving in Sweden, I joined a well-populated local exercise club. When I work out there it's usually full of people, but very few words are spoken. The exception to the silence occurs when small groups of immigrants from the Middle East or Africa indulge themselves in the abundant self-expression of their native cultures.

The Swedes, in contrast, are silent.

This is not to say that Swedes exercise alone. They seem to enjoy assembling in large groups for organized exercise classes. During these workouts, music plays and the instructor shouts out instructions. But the participants remain silent. Swedes seem to enjoy being alone together.

Now, I know that is a stereotype. After all, Swedish actress Greta Garbo’s signature line is "I want to be alone".  But stereotypes often contain a germ of truth. As an American, I have been struck by both the solitude and togetherness of Swedish society.

Swedes leave each other alone, but do conform to a number of national group norms. My experience with Americans is just the opposite. Americans spend much time fraternizing and freely creating friendships, but the group norms available in my country are plural and optional.

What Swedish group norms? Well, how about lagom, jantelagen, sexual autonomy and wearing black? It is difficult to identify a comparably lengthy list of norms uniformly characterizing the US.

The US has long been and remains an invented culture, full of disparate and changing parts. Those parts vary by race, ethnicity, class and region, to name a few demarcations. Identities in the US are lightly held; there is always the possibility of moving to a different geographical and cultural location and reinventing yourself. Lots of Americans are at any time “on the move” in that way. Jay Gatsby is alive and well in contemporary America.

Sweden, like many European nations, has an old and deeply-rooted culture that manifests itself in dominant group norms. Reinvention is less possible and, it seems, less desirable to Swedes.

Those norms may have grown from the centralist history of their institutions. Sweden has long had one strong national government, a single state church, one public system of higher education, one set of national employment laws.

The US, in comparison, is pluralism run rampant. Upon arriving in Sweden, I spotted in the newspaper a story about how all employed Swedes can maximize their vacation days under the national employment laws. In the US, there are no common vacation employment laws at any level of government. One’s vacation arrangements are entirely between the employee and the company.

The Swedish view of the US is an interesting one. I know it as a polyglot of fifty states, each with varying laws, cultures and populations.  For Swedes, the US is heavily defined by the city of New York. Swedes focus on New York far more than most Americans do. I have spotted more New York Yankee hats in Sweden than I have ever encountered in the US outside of New York.

That is sad news for Minnesota, my state, which has the largest number of residents with Swedish heritage in the US (that includes me).  Scant evidence of its presence appears in Swedish culture.

But why? Minneapolis, Minnesota is the home of the Swedish-American Institute and the state includes Gustavus Adolphus College and many towns with Swedish names, such as like Stockholm, Vasa, Lindstrom, Kalmar, Borgholm, Malung, Ronneby, Svea, Tegner and Upsala. For many years, the world’s largest Dala horse stood in Mora, Minnesota, until Swedes built a larger one. But to Swedes, Minnesota is not cool like New York.

The New York fascination, according to a Swedish academic I know, comes from Swedes priding themselves on being open-minded, cosmopolitan and tolerant. In fact, she argues, Swedes are quite Germanic, preferring group conformity to common social norms.

Now, many of those norms are defensible and desirable, but they stand in contrast to America’s pluralism. As someone from a culture outside of those norms, I have frequently been asked by Swedes “How long are you staying with us?”

That’s the big lesson for me as I leave Sweden. It is a country that works well, but its success derives from a history and culture at great variance from that of the US. So, as an American, I will always view and frequently admire Sweden "from afar".

Steven Schier is Fulbright Professor of American Studies at Uppsala University and Professor of Political Science at Carleton College in Northfield, Minnesota.