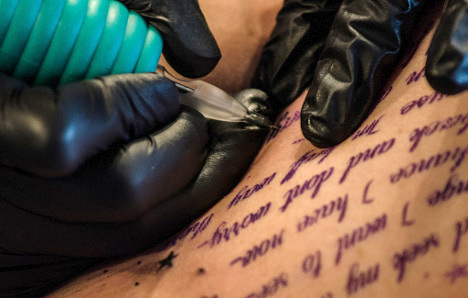 Ulf Bergström, 63, from Måla in northern Sweden said the needle entered his arm forty years ago when he was a keen amateur tattooist.

“So I put the needle in my arm and then hey presto it disappeared,” he told the Norran newspaper.

Bergström sought medical help and even got an x-ray which revealed nothing. The 17mm needle had vanished at least for a few decades.

“After the needle didn’t ‘get in touch’ I completely forgot about it,” said the 63-year-old.

That was until a few days ago when he was reunited with the needle after developing a severe pain in his right big toe. Roping in his wife for help she pricked the blood filled pimple on his toe which “squeezed out a lot of puss and shit,” he said.

Then to the Swede’s astonishment his wife pulled out the needle which entered Bergström’s body when Richard Nixon was still the President of America.

He said he recognised the needle immediately and added that that he still feels pain in his right foot.

“It’s been in my body for 40 years. The only question is which route it has taken, that is something I would like to know,” said Bergström.