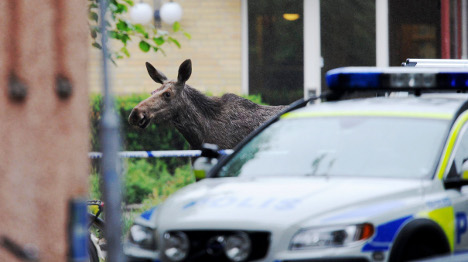 In 2011, this elk broke into a Swedish eldercare home. File photo: TT
Monday afternoon was no ordinary school day for students at Sörgårdsskolan, in Mölndal, western Sweden. Shortly after lunch, an elk calf entered though one of the classroom windows. The junior high school pupils beat a hasty retreat.
"The elk felt cloistered in there in the confined space," regional police spokesman Thomas Fuxborg told The Local. "So when the children had locked themselves into the adjoining paint supply room, they could hear the elk butting windows and doors to get out."
When police arrived on the scene, the officers had to break a window to usher the children from the building to safety.
"I'm sure they're feeling skittish, but no one was physically hurt," Fuxborg said.
"Everyone was so shocked – we couldn't believe it was true," student Sophia told the local Göteborgs-Posten newspaper about the eventful afternoon.
In Sweden, it's not unheard of for an elk to wander into towns and get into trouble. In 2011, an elk walked into a home for the elderly (see picture) in Alingsås. Several Swedish swimming pool owners have woken up to elks stuck in their backyard over the years. Most famously, an elk that got drunk on fermented apples got stuck in the apple tree.
Yet, the local police officer said he'd only seen one elk break in during his decade on the Västra Götalanda County beat.
"This is damn rare," Thomas Fuxborg said.
"I've worked up here for ten years and only once has an elk entered a building. That time it was a shoe store, or maybe a clothes store." .
His colleagues decided to put the elk down.
"The elk was panicked, it was stressed, it was in a state," Fuxborg said. "It could have hurt someone."