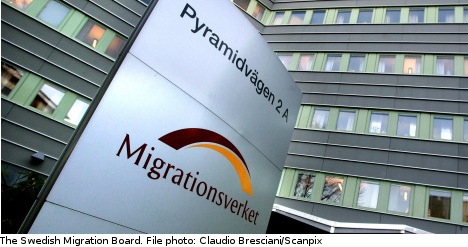 The woman, who lives in Uppsala, eastern Sweden, is due to be deported from Sweden on Tuesday following a ruling by the the Migration Court of Appeals (Migrationsdomstolen).

Under the Migration Board's rules an applicant must have held down a job for six months before applying for a work and residency permit.

But six months prior to the woman's application she had worked the entire period but in two separate jobs and therefore didn't fulfil the specific criteria set by the migration authority.

"For a person to have found work and still be deported goes completely against the law's purpose. It was possible to have a different interpretation," the woman's legal counsel Bo Johan Wigfeldt told the Upsala Nya Tidning.

The woman, whose identity has not been revealed, has lived in Sweden for 13 years and has twice applied for legal asylum. However, on both occasions she was turned down.

Her niece told the Uppsala newspaper that her aunt was heading back to a "death sentence" in her home country which is understood to be a hardline dictatorship.

"She is scared and crying," said her niece.

A district court judge with the Migration Court declined to say if the one-job policy was flawed.

"It's not for this court to determine what is reasonable. We read what is there in the law," Arvid Hessén told the paper.

The court did not grant the right for an appeal.