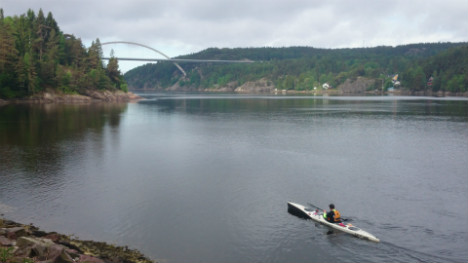 James Cox gets in some practice ahead of his epic trip. Photo: Private
When The Local contacts James Cox, a 32-year-old Englishman, he's in his boat and hanging on to the edge of a rock in the Gothenburg archipelago. The trip has already started.
A few days on and now he's regularly blogging for us about the journey – which he estimates could take up to two months.
While the purpose of the expedition is to raise money for prostate cancer, Cox can't deny that he's also in it for the adventure.
"I'm also doing it to test myself against the elements and have some fun along the way," he tells The Local.
And he doesn't expect it to be easy.
"The toughest physical challenge is the weather, it can be truly soul destroying to paddle head on into strong winds. However, the biggest mental challenge started the moment I parted company with my wife Erica on day one. It was heartbreaking having to paddle away from her."
Another challenge will be likely missing the chance to see the World Cup due to being away from home, but Cox adds that he's open to an invite from "a friendly Swede on the east coast" whenever England is playing.
READ THE BLOG HERE With a daily diet of boil-in-bag breakfasts and dinners, as well as a boatload of energy gels and bars, the kayaker also has a secret weapon to avoid shedding the kilos.
"I'll also stuff myself with a Danish pastry whenever I get the chance… it's hard to keep weight on when you're kayaking ten hours a day," says Cox, pictured above lapping up some sunshine.
And with ten hours a day, that's a lot of Danish pastry – and hopefully a lot of blogging.
"This is my first big adventure," Cox adds.
"Whether it turns out to be my last remains to be seen."
Follow James on his new blog, and visit his website to donate to the cause.