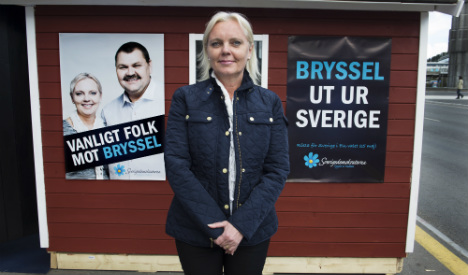 Kristina Winberg is an MEP for the Sweden Democrats. Photo: TT

Joining a group within the European Parliament is considered crucial for parties to exert any influence on policy in the European Union and the Sweden Democrats (SD) have long seen the Danish People's Party and The Finns as desirable partners.

The pair's acceptance into the European Conservatives and Reformists (ECR) group on Wednesday therefore leaves the Sweden Democrats, who won two of Sweden's 20 parliamentary seats in the EU election, on the outside looking in.

SD have applied to join both the ECR and the Europe of Freedom and Democracy (EFD) group, which is co-chaired by Ukip's Nigel Farage and Franceso Enrico Speroni of Lega Nord.

Farage, whose party claimed the largest number of seats in the UK, has recently described working with the Sweden Democrats as "highly unlikely" and that leaves the party with few remaining options.

"We are not in any direct negotiations at the moment," Sweden Democrat spokesman Martin Kinnunen told the Svenska Dagbladet (SvD) daily on Thursday.

Marine Le Pen's National Front has been making attempts to woo the Sweden Democrats into a newly formed right-wing group, but the party has so far proved resistant to the French party's charms.

While SD leaders met with Le Pen in autumn 2013, the party recently told the news agency TT that a cooperation with the National Front was "no longer an alternative".

While the process of selecting partners within the parliament's group system is not yet complete, the Sweden Democrats are facing up to the prospect of being without any partners in Strasbourg.

"If we end up without a group we won't see that as a catastrophe either," Kinnunen told SvD.