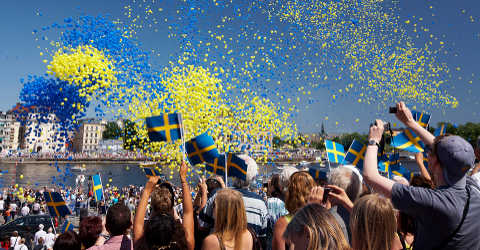 Photo: TT
The largest group to become Swedish this year is originally from Iraq, followed by Poland, Somalia and Thailand. The citizenship approvals administered by county administrative boards to citizens from other Nordic citizens are not included in the figures.
THE LOWDOWN ON SWEDEN'S NATIONAL DAY
That Iraq is greatest due to the requirement of having lived five years in the country. Many Iraqis sought asylum in Sweden in connection with the widespread violence in Iraq in 2009, received a residence permit and applied quickly for citizenship.
Aside from asylum, the figures show that many new Swedes arrived in the country as labour market migrants, students or due to family connections.
READ ABOUT ONE IRISHMAN'S PATH TO SUFFRAGE IN SWEDEN
A new law to come into effect on April 1st 2015 is set to impact the citizenship issue. The law states that children always become Swedish citizens if either parent is a national.
Furthermore those who have lost their Swedish citizenship due to rules aimed at avoiding dual citizenship will also be able to apply to have their citizenship reinstated.
According to new figures from the European Union border agency Frontex the number of migrants seeking a new life in Europe has increased dramatically in the past year. Some 60,000 migrants have arrived in the European Union in 2014 to end May.
The vast majority of migrants arrived in Italy, having made the journey through Libya or fled the civil war in Syria.
The Migration Board recently raised the forecast for the number of asylum-seekers to Sweden during 2014 to 61,000, of whom 38 percent are expected to come from Syria.