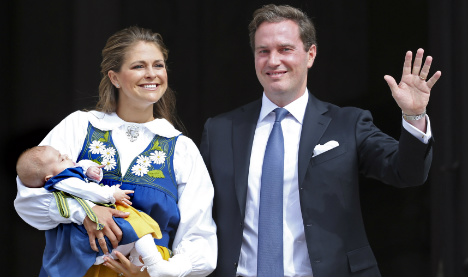 Photo: TT
There was a murmur of excitement through the crowd when Princess Madeleine and her husband Chris O'Neill displayed the three-month-old princess clad in folk dress.
Madeleine proceeded to make a short speech in which she wished all a happy National Day and formally opened the palace to visitors. The couple joined the remainder of the royal family later in the evening for traditional celebrations at Skansen.
While National Day has been celebrated since 1893 the day has only been a public holiday since 2005. The day is starting to become established however and the crowds were out in force outside the Royal Palace and along Strandvägen in anticipation of the royal cortège at Skansen.
In Malmö Integration Minister Erik Ullenhag (FP) spoke at the Mosque of Rosengård in Malmö.
"For me, the National Day both a day of both the old and the new. It is both meatballs and hummus, and the Islamic Centre is part of a new Sweden," Ullenhag said.
Several hundred people gathered after Friday prayers to participate in celebrations accompanying the speech, including Albanian dance and song by school children from a local Muslim independent school.
Princess Leonore remains in focus over the weekend as her christening is scheduled for Sunday. Some 42 media companies have signed up to cover the event and interest in Germany is predicted to be particularly significant.
The event has been played down somewhat by the Stockholm Visitors Board however who consider the christening a largely private family affair.
"The PR value is if the international press comes here and writes about it. The coverage is often positive," said Peter Lindqvist at the board.