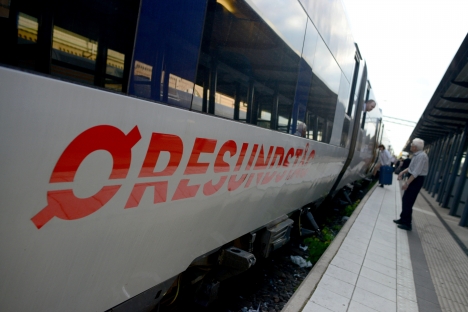 Photo: TT
Seko has invited the employers' organization ALMEGA to new negotiations on Sunday to begin at 11am.
"We've looked over and scaled down our previous demands. Now we only have two clear demands in order to resolve and for the trains to start rolling again," said Valle Karlsson at Seko.
The first requirement is that the train operator Veolia agree to a cap on how many temporary workers that they are allowed to use during the course of a year
"We want Veolia to make a commitment that they will not use hourly employees for more than 40,000 production hours," Valle Karlsson said.
The second requirement is that one year's temporary employment should lead automatically to a permanent appointment.
"It's acceptable to use temporary employees, but not for years and years. Through this requirement, we want to get at the abuse that we think Veolia is guilty of and which is spreading across the industry," Karlsson said.
The strike broke out last Monday when around 250 workers on the southern Sweden train lines went out on strike. The initial strike action left some 75,000 passengers stranded.
It remains unknown exactly how long the strike will continue. Trains from Malmö have also stopped running to Gothenburg, Kalmar, and even one on the Snälltåget line to Stockholm.