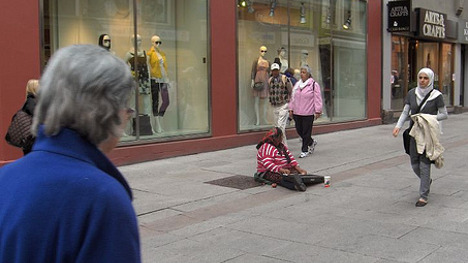 The person begging in the picture is not the person featured in the story. Photo: TT
The suspected assault occurred at the Tekniska Högskolan metro station in central Stockholm.
The victim is reported to have been suffering shock after the alleged attack but did not require hospital care, according to a report in the Expressen daily.
"A real low point. Unprovoked incidents are never fun. No crime is fun but there are different levels of hell," said Victor Adolphson at Stockholm police to the newspaper.
Norrmalm police confirmed that the 55-year-old was released after questioning. He is currently suspected of minor assault. According to police and prosecutors the case will be assessed according to hate crimes legislation which would increase the severity of the alleged offence.
"Prosecutors will certainly look at it," said Tomas Karlsson at Norrmalm police to the TT news agency.