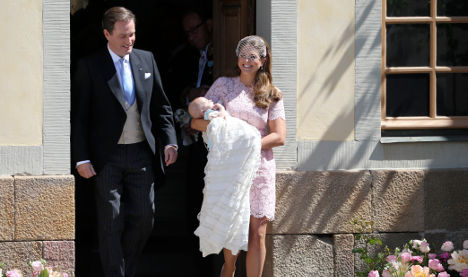 Princess Madeleine and her husband Christopher O'Neill's daughter was born three and a half months ago at New York Presbyterian Weill Cornell Medical Center in New York and Sunday was chosen as the day of her baptism.
Sunday is one year to the day when her parents married in Stockholm.
Princess Madeleine chose to defy the royal traditions and baptise her daughter in Drottningholm Palace church. Royal baptisms in modern times usually take place in the Royal Chapel at the Royal Palace in central Stockholm. Photo: Jessica Gow/TT
"Drottningholm is so important for Princess Madeleine. She was born and raised there and had their wedding reception there," said royal court expert Roger Lundgren to the TT news agency.
Some 160 guests were invited to attend the service. No foreign royals were however on the guest list.
A large press contingent from both Sweden and Europe were in Stockholm to watch Princess Leonore's baptism.
But in comparison to Princess Estelle's baptism, where some 55 media companies and more than 400 journalists were accredited, interest was a little cooler this time around.
Just over 40 Swedish and foreign media companies were on the accreditation list and about 60 journalists and photographers took their places in the press gallery at Drottningholm Palace church.