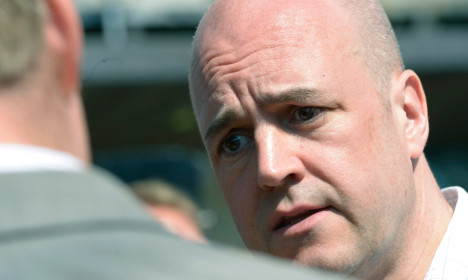 Photo: Bertil Ericson/TT
German Chancellor Angela Merkel, British Prime Minister David Cameron, and Dutch Prime Minister Mark Rutte will be in Sweden on Monday night to meet with Swedish Prime Minister Fredrik Reinfeldt.
The Swedish government said the agenda at the Harpsund residence would be filled with talks about job creation in the EU and the constellation of the new European Parliament.
However, as the summit approached, experts began to question whether there wasn't something more pressing than Swedish meatballs on the dinner table, and whispers arose as to whether Reinfeldt himself could have the right-sized feet to fill the shoes of current EU Commission president, José Manuel Barroso.
"It's not likely that Reinfeldt will become the president of the European Commission… but it's not impossible," Ulf Bjereld, political scientist at Gothenburg University, told The Local.
Bjereld took to his blog on Sunday to sing the praises of the Swedish prime minister, saying he'd be "excellent" at the job, citing how he has kept the Alliance together and in power for almost eight years – "a historic political achievement," he wrote.
He also admired Reinfeldt's "exemplary" attitude towards the far-right Sweden Democrats in keeping them at arm's length when it came to influencing policy.
"We already know he's a good team player, he's respected far and wide among the EU states, and his record with Sweden's public finances has been exceptionally strong through the financial crisis and beyond," he told The Local.
Reinfeldt is likely to lose at the national elections in September, Bjereld added, but would plunge his party into a major leadership crisis should he jump ship as the election campaign heats up.
Bjereld said that while Reinfeldt is a loyalist and unlikely to publicly show any enthusiasm for the EU position, the job could be a feather in the cap for the Moderates, compensating somewhat for a near-certain loss at the polls.
The Telegraph newspaper, meanwhile, said that Reinfeldt was "one to watch", especially as a personal friend and ally of Cameron.
While Reinfeldt himself hasn't commented on the speculations yet, he did question the suitability of Jean-Claude Juncker as the next European Commission president in a front-page interview with the Financial Times on Monday.
Juncker, the main candidate of the centre-right European People's Party (EPP) and the favourite to take the top job has already seen some staunch opposition from UK Prime Minister Cameron. The British leader is not a fan of Juncker's federalism, and also thinks elected national leaders and not the European Parliament should choose who heads the commission.
Reinfeldt told the Financial Times he too was opposed to the Spitzenkandidat nomination process, which would automatically make Juncker Commission president by virtue of him being the candidate selected prior to the last month's elections by the EPP, the group that ended up winning most seats.
"We do not support the idea because it would make it impossible for any other candidate and rule out a lot of potential commission presidents," he said. "We should take care of the balance between different institutions."
Meanwhile, Germany's Merkel has publicly endorsed Juncker to be the next president. This backing, however, may leave her in a "difficult position" during talks on Monday and Tuesday, predicted Michael Wohlgemuth, the director of think-tank Open Europe Berlin.
"It is quite well known that he is not her ideal candidate," he told The Local. "She would have preferred someone like Christine Lagarde; and she does not want to isolate Cameron on this important question."
"But at the same time she will have to stick to her endorsement of Juncker. This means that there could be a qualified majority decision in the European Council. A blocking minority might still emerge if, say, Italy or perhaps France do not support Juncker. Then Merkel would be off the hook. But since this seems unlikely at the moment, it might be wise to discuss other top-jobs and priorities in the EU – while hoping that Juncker may eventually drop out of the race as his own decision."
The three country heads will stay the night in Sweden, and will hold a joint press conference together with Reinfeldt on Tuesday morning.