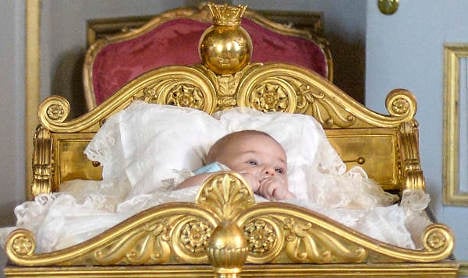 The youngest Swedish princess was baptized on Sunday, an occasion observed with lace, hats, and a golden cradle made for her great grandfather.

The Swedish princesses are already no strangers to hand-me-downs, as Leonore was baptized in the same dress as Estelle. The gown was also worn by Victoria and King Carl XVI Gustaf himself. Estelle's dress at Leonore's baptism was also an heirloom, worn first by Victoria in 1980.

IN PICTURES: A royal baby gets baptised

Effervescent Estelle was more than happy to steal the show, however, flashing more than a few smiles for the camera after her droopy-eyed cousin dozed off.

Swedish royals are traditionally baptized in the Stockholm Palace church, where Estelle was baptized in 2012. Princess Madeleine and husband Chris O'Neill decided to depart from tradition and hold the ceremony in the smaller chapel at Drottningholm.The water used in the ceremony came from a well on Öland, where the royal family has a summer residence.

The baptism was attended by the royal family, closest friends, and members of Swedish parliament.

Princess Leonore is fifth in line to the Swedish throne and was born in New York on February 20.